Creepy: Girl on a swing shown on EDSA billboard
🔍

Creepy: Girl on a swing shown on EDSA billboard

By Coolbuster
May 07, 2015newstrending topicvideoviral
Netizens were baffled after some celebrities posted on Instagram a creepy video clip of a girl on a swing being shown on a billboard in EDSA.


An 11-second video posted by actor KC Montero initially shows an ad for the Pacquiao vs Mayweather match then suddenly shifts to what appears to be a silhouette of a girl swinging back and forth, Manila Bulletin reported.

"Your Face Sounds Familiar" contestant Maxene Magalona posted a similar video with the caption: "Did you see the video billboard on EDSA with a little girl on a swing? Kinda creepy don’t you think?? I wonder what that’s about?"

Netizens said they believe it was a teaser for a new movie or television show.

The description under the movie's theatrical trailer on YouTube reads:

Daniel and Cynthia, a young couple with a child on the way, experience some hard times in Manila. They head back to Baguio, where Daniel is originally from, to start over again. Through the kindness of Alex, Daniel’s well-to-do childhood friend, they get to stay in a large house, rent-free; and he gets a job offer as well.

Everything seems to be falling into place for them – or so they think – until strange things start to happen in their house." 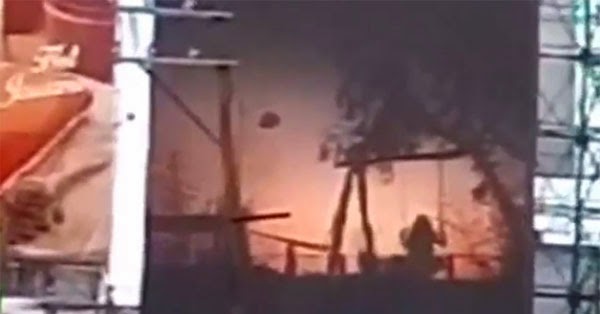 The trailer, however, does not include the creepy scene of the girl on a swing that was shown on the LED billboard along EDSA.