By Coolbuster
May 02, 2015newstrending topic
Mary Jane Veloso's chance to be able to come home to the Philippines is slim, according to a laywer who also said her mother Celia's remarks against President Benigno Aquino III was a "wrong move."


In a press conference after arrival from Indonesia on May 1st, Celia aired her grievances against the government and belied Aquino's role in her daughter's reprieve. She's been tagged by netizens as ingrate since.

An article posted on Facebook by journalist and social media personality Even Demata cited an Atty. Mar Dionicio as saying that Mary Jane's execution may push through if she won't receive executive clemency from Indonesian President Widodo. 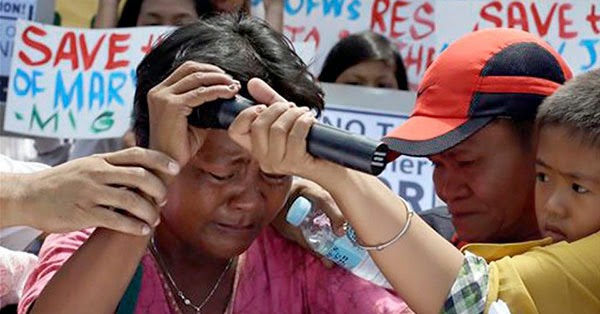 The lawyer reportedly said Celia made a wrong move when it criticized Aquino and instead gave credit to the militant group Migrante, since Mary Jane's chance for freedom could now be based on the dialogue between the two presidents.

What the President did to save Mary Jane at the last hour was not easy, the lawyer reportedly said, adding that in his desire to have the convicted drug mule spared from execution, Aquino broke protocols.

Atty. Dionicio reportedly said it is possible that public sympathy will shift from the Veloso family to PNoy.