Veloso is one of the 9 drug convicts who were scheduled for execution Wednesday, April 29. The eight foreigners—a Brazilian, four Africans and one Indonesian—were executed via firing squad on a prison island.

Why was Veloso spared?

Prasetyo said an exception was made for Veloso "because there was a last-minute plea from the Philippine President. There was someone who surrendered today. She claimed she was the one who recruited Mary Jane," Rappler reported. 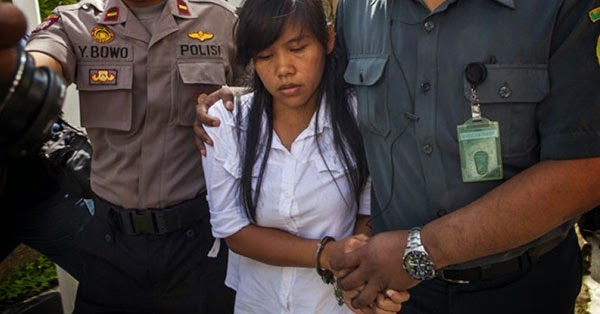 The 30-year-old OFW was sentenced to death in 2010 on charges of drug smuggling. She was caught bringing 2.6 kilograms of heroin hidden in a suitcase which was allegedly given to her by Maria Kristina Sergio, her illegal recruiter.

Out of fear for her life, Sergio voluntarily turned herself to police custody on Tuesday, April 28, a day before the scheduled execution of Mary Jane Veloso. She claimed to have received death threats from Veloso's relatives.

Sergio and two others are now facing charges of illegal recruitment, human trafficking, and estafa filed by the National Bureau of Investigation which said that Veloso "was a victim of deception and manipulation by her illegal recruiters."

The Department of Justice (DoJ) has set a preliminary investigation on the cases involving Sergio and her cohorts on May 8 and 14.

Justice secretary Leila de Lima said that Sergio's group will be put under the Bureau of Immigration's lookout bulletin.

Meanwhile, Mary Jane Veloso was brought back to the Wirongunan prison in Yogyakarta. The warden, Zaenal Arifin, told media that she arrived at 8 a.m. Wednesday and underwent a medical check-up.

Veloso, described as "healthy," had to registered again as if she's a new resident of the prison facility, Arifin added.