By Coolbuster
April 17, 2015news
Task Force Magsino has created a Facebook account to gather information that will help solve the case of Mei Magsino, who was killed Monday.


The 40-year-old journalist was shot by a lone gunman while walking a street near her apartment in Barangay Balagtas, Batangas City, at noontime last April 13.

The assailant approached from the back, shot her at close range in the head, then escaped on a black and white Honda motorcycle driven by his cohort. The incident was captured by a CCTV camera.

Batangas congressman Mark Llandro Mendoza and senator Ralph Recto reportedly offered a P200,000 reward to anyone who can provide information that will lead to the arrest of the suspects. 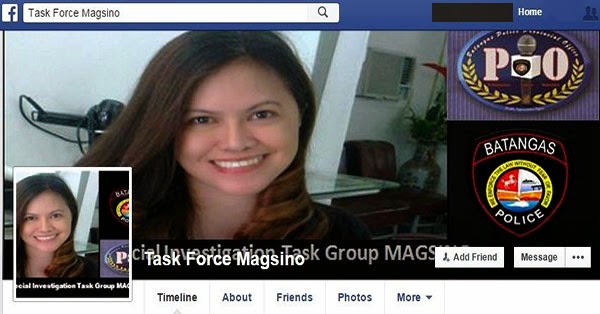 Meanwhile, Task Force Magsino through its Facebook account, which was created on Thursday, urged netizens to contact them or send legit information via private message. The group also provided the cellphone number 09062072776 for those who wish to call or text.

According to a report published on Inquirer.net, Magsino was an outspoken critic of politicians in Batangas. She used to post her tirades against local government officials on social media.