By Major Tom
April 20, 2015boxingnewssports
In the previous bout of Manny Pacquiao, the Hollywood action icon (who is also known through his movie persona as the never-say-die boxer Rocky) supported the Filipino fighter's opponent, Chris Algieri.

He made the wrong bet and this time around Sylvester Stallone supports Pacman.


Journalists who cover the Pacquiao beat were able to catch the actor visit the Wild Card Gym where the "Pambansang Kamao" is working out and getting ready for the biggest and highly anticipated bout of his boxing career slated on May 2 (May 3 in the Philippines) against Floyd "Money" Mayweather Jr.

In a report from Inquirer.net, Stallone was heard saying "He's the best. He's the best" when asked what he thought about what he has seen in the sparring session of Pacquiao.

His respect for the Filipino icon is also evident as can be read through his latest tweet. 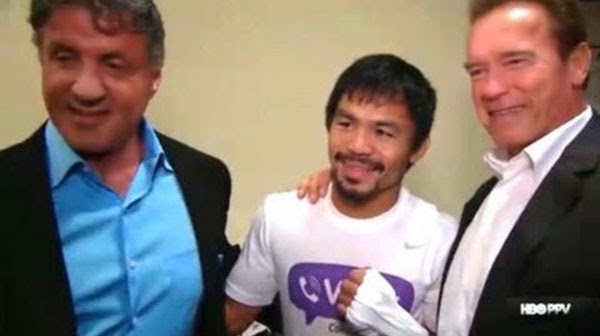 MANNY PACQUIAO Without a Doubt the single Bravest, and most EXCITING fighter to ever lace on gloves... No one comes close . SEEN them ALL!

Stallone is slated to reprise his iconic role in an upcoming film entitled "Creed."