By Major Tom
April 29, 2015newstrending topic
The Filipino nation is relieved now that Mary Jane Veloso’s life has been spared from execution in Indonesia for drug trafficking charges.

Just when most people were praying hard for her to live, a certain Shekinah Venturina has a contradicting view with her remarks that have gone trending on Twitter. The hashtag #RIPShekinahVenturina has caught the eye of netizens. 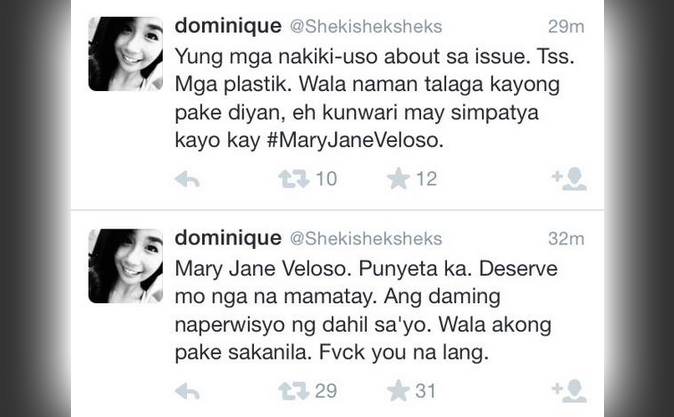 Apparently, Venturina's tweets support ending the life of Mary Jane Veloso while many others have come to the defense of the OFW, who is in death row for allegedly bringing 2.6 kilograms of heroin into Indonesia.


@Shekisheksheks it's a senstive topic. be responsible on what you post. unless, u want to replace her & be executed. #RIPShekinahVenturina
— Francis Ong Tilla-in (@tillaincisong) April 28, 2015

Shekina's account @Shekisheksheks has been switched to private, but she is said to have apologized for her mistake.

STOP WITH THIS HASHTAG, PEOPLE! FOR CRYING OUT LOUD! (with this tweet's exception ofc 😂) #RIPShekinahVenturina pic.twitter.com/u3iMOl3rXm
— mitch (@jaymcdonut) April 28, 2015

Meanwhile a certain Vinze Opena has come to side with her friend. 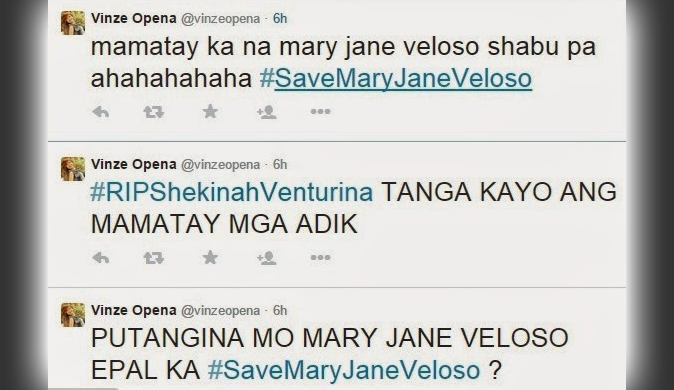 One Chester Chua was able to capture a screenshot of Venturina's tweets and posted it online.

Some chimed in, saying it was Chester who began spreading the trending hashtag.

Others are simply confused.

What do you think about this issue?