By Coolbuster
April 08, 2015newsviral story
A Czech father has been spotted playing music for money on the streets of Cebu City, Philippines. Here's the real story on why he's busking.


According to call center agent Trix Sha, who posted photos of the family on Facebook last Saturday, April 4, she and a friend were on their way to Metro Gaisano Cebu in Colon when she saw them at the sidewalk outside the establishment. 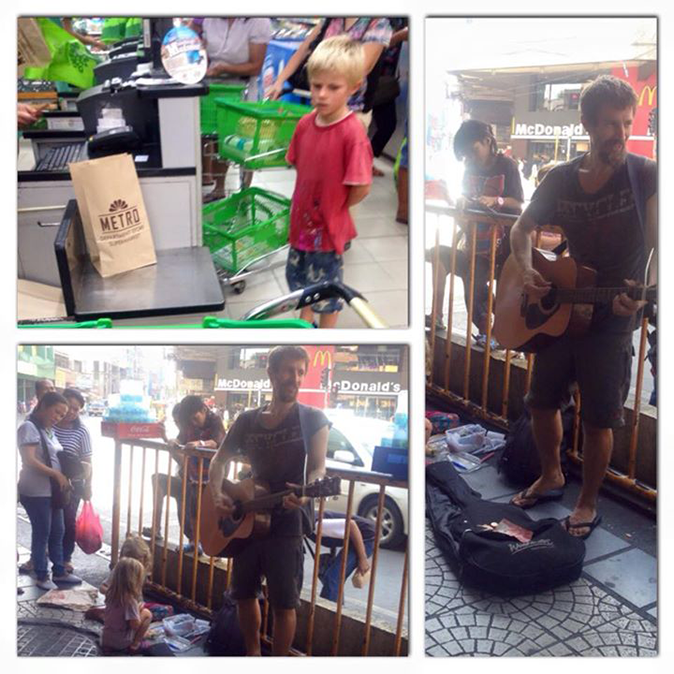 She said the father sings ang plays his guitar while the kids paint so they can get donation money from passersby.

Trix said she tried to talk to the father for details but he was hesitant to answer her questions. She gave him a small amount of money for his kids.

"When I went inside the grocery I saw his son arguing with the cashier kasi kulang yung pera nya pambili ng 3 [Dutch Mill]," Trix narrated. She also gave the boy a small amount of money to cover the cost of the dairy product.

Feeling their hardships, Trix said she hopes there's someone who knows or can help the foreigners. In a comment on April 6, she said she already sent an email to the embassy. 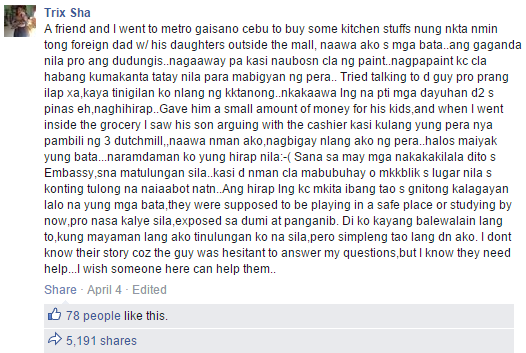 Trix also posted a video of the father performing in the sidewalk.

I really hope we can help them

We stumbled a post on Stickboy Bangkok titled "Police Tell Busking Farrang No More Singing On The Streets" which was published earlier this year.

According to the report, the family arrived in Thailand in December spending time in Krabi before arriving in Phuket.

The article identified the Czech dad as Lukas Matena. The father of four was reportedly spotted playing guitar and singing in front of a department store in Phuket "trying to raise cash after his six-year-old daughter, Rebeka, was hit by a car" on January 6.

We arrived in Phuket on January 4. We were inside Chalong temple. I was parking the motorbike and did not know Rebeka had decided to cross the road by herself. A car coming from inside the temple hit her and caused three fractures in her jaw. We were to have left Phuket last Thursday [January 8] but because of the accident we have to wait until our daughter gets better."

The busking father said the family’s visas had been extended for 30 days on Friday [January 9]. At that time, her daughter was undergoing treatment at the Bangkok Hospital in Phuket where she is also being cared for by her mother Klara. She was scheduled to undergo a second operation, but the family has no money to cover the costs, the report said.

Immigration Police visited the family in the hospital "to make sure that they are being helped properly." Police Lt. Tapanan Akkarakantarakorn had told them "that it is illegal for a foreigner to play music on the street for money" and suggested that they contact the Czech embassy.

This is probably the reason why the busking Czech dad and his children transferred to Cebu.