By Coolbuster
April 13, 2015news
The kin of Suzaine Dagohoy, who passed away after drinking milk tea Thursday in Manila, has decided to press charges to give her justice. 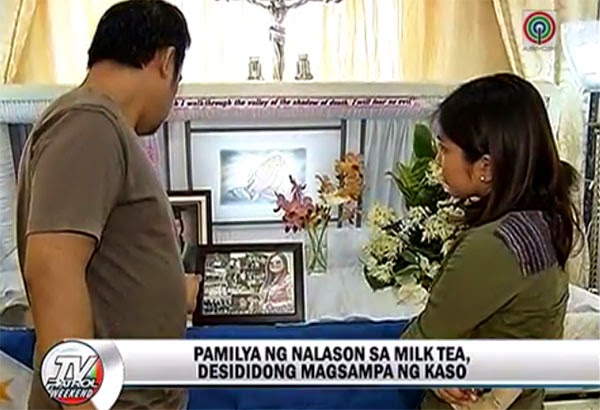 Dagohoy's body was already brought to her hometown, in Sta. Cruz, Zambales. Her family is awaiting the results of the tests conducted by the Philippine National Police (PNP) Crime Laboratory and the Food and Drug Administration (FDA) to determine the cause of her death.


The family is planning to file appropriate cases against the tea house and anyone who will be held responsible for the untimely passing of their loved one, not only to achieve justice but also to prevent the incident from happening again.

Dagohoy's brother also called for the improvement of hospital facilities. In an interview with ABS-CBN News, Frederick said his sister was still alive when he arrived at the Ospital ng Sampaloc, but the emergency room lacked medical supplies.

Frederick shared that he was told to buy what was necessary outside the hospital and able to return after an hour, bringing with him the medicines and supplies that could have saved his sibling's life, but it was already late. The hospital has yet to give a statement on the matter.

On the other hand, the victim's kin was notified that it might take two months before the results of the crime laboratory tests are released.

Earlier, SPO2 Jonathan Bautista of the Manila Police District-homicide section said the families of Dagohoy and Aydalla could file charges of reckless imprudence resulting in homicide and physical injury against Abrigo’s wife, Adela, the registered owner of the shop, since her husband also died.

The Public Attorney's Office has reportedly offered them legal services.

Abrigo's only son, Lloyd, is under investigation for allegedly bringing a foul-smelling liquid into the store's kitchen the night before his father and Dagohoy died.