By Coolbuster
April 29, 2015newsvideoviral
American actor Jeremy Renner, a.k.a. Hawkeye in The Avengers, sings about his super powers to the tune of Ed Sheeran's "Thinking Out Loud."


Hawkeye performed the cover on The Tonight Show starring Jimmy Fallon, who said the character "sometimes gets overlooked" so he's giving him a chance to "shed light on his own strengths and abilities."

The Avengers co-star changed the lyrics of the song. He was singing while apparently playing the piano as funny photos and videos were flashed on a big screen in the background. 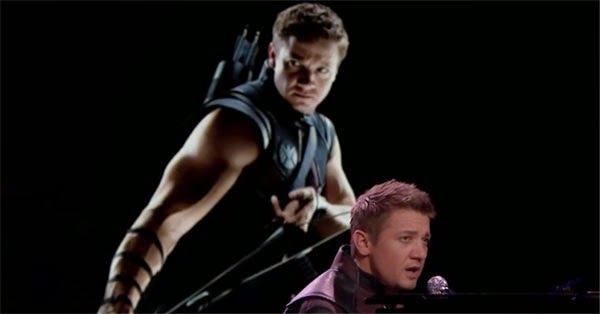 The video already got more than 80,000 hits on YouTube and nearly a million views on Facebook since it was uploaded today.

Jeremy Renner, a.k.a. Hawkeye has a good voice, don't you think? He should pursue a singing career.