By Coolbuster
April 18, 2015newsshowbiz
Singer Gary Ignacio is dead. The former lead vocalist of the Filipino rock group Alamid died Friday due to multiple organ failure. He was 49.


The band, best known for the OPM love song "Your Love," broke the sad news on their Facebook page.

"In behalf of the Ignacio Family, we would like to announce that our brother. Gary "Alamid" Ignacio, passed away today at exactly 2.50pm at NKTI [National Kidney and Transplant Institute] ICU 5 due to multiple organ failure," Alamid posted.

They said the wake is at the Sto. Rosario Village Chapel in Barangay Baritan, Malabon City. 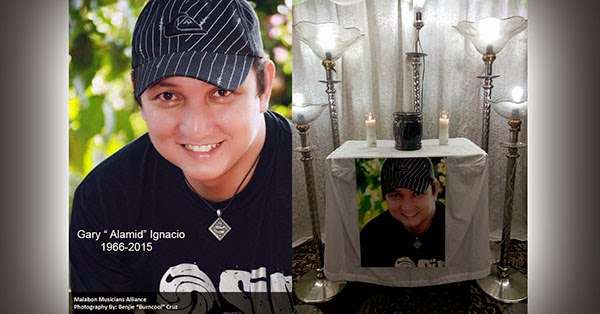 In behalf of the Ignacio Family, we would like to announce that our brother. Gary "Alamid" Ignacio, passed away today at...

Professional photographer Benjie Burncool Cruz, presumably a family friend of the Ignacios, also posted on Facebook that the interment will be on Tuesday, April 21.

"Tomorrow will be the start of Gary's wake full of music and on the last day April 20 its a Malabon Musicians Alliance night music jamming with friends from music industry," his April 19 status message reads.

Before he passed away, Ignacio had been battling bone cancer for five years.

His last performance with the band was in April 2010, during the victory party for Senator Ralph Recto, his cousin.