By Admin
April 11, 2015earthquakenewsvideoviral
In this viral video, a dog senses an earthquake and runs seconds before it happens. Is this proof that animals can actually predict disasters? 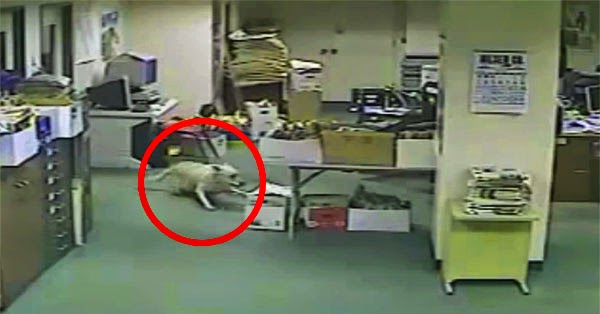 The video, which is already over five years old, was originally published by YouTube user BrianWheeler12 in January 2010. It became a trending topic again when the reposted one was shared on the entertainment and news social networking site Reddit on Thursday, April 9.

The dog, Sophie, sensed the magnitude-6.5 earthquake while inside the office of news organization Eureka Times-Standard.

Sophie is seen 15 seconds prior to the start of the earthquake, looking sharply at the floor and dismissing it.

About 15 seconds later she again looks sharply at the floor and bolts to the other end of the room when the rumble starts, trying to locate her owner -- who is not the first person out the door, but the third person out, Jessica.

Sophie can be seen directly behind Jessica as her back and tail graze the lower right-hand corner of the screen in the first segment.

In the second segment Sophie spotted Jessica coming from the sink where she was washing her hands and ran to catch up. She then escorts Jessica safely down the stairs and out of the building.

How the dog detected the earthquake before it occured sparked an online debate among Reddit users. One jiminatrix posted:

Earthquakes generate sound waves, inaudible to humans, that dogs and other animals with acute hearing can detect before the primary waves have reached the surface strata."

A netizen who uses the handle GeassControl argued, saying:

No, kind of. It is more involved than that.

The second type of body wave is the S wave or secondary wave, which is the second wave you feel in an earthquake. An S wave is slower than a P wave and can only move through solid rock, not through any liquid medium. It is this property of S waves that led seismologists to conclude that the Earth's outer core is a liquid. S waves move rock particles up and down, or side-to-side--perpindicular to the direction that the wave is traveling in (the direction of wave propagation).

I understand it was named after Augustus Edward Hough Love, that was a joke my teacher in geology class always loved to say to get you to remember, when you think up and down you think love, helps you to remember.

I also didn't mention Rayleigh waves, because they are grouped under the "Surface Waves" grouping. These waves happen at the same time when the power hits the surface and it sent in all directions."

A story published on Gizmodo in 2011 reads:

Seismologists think animals sense an electrical signal generated by the movement of underground rocks before an earthquake, or they might sense early but weak shocks that humans can't feel."

Very few humans notice the smaller P wave that travels the fastest from the earthquake source and arrives before the larger S wave. But many animals with more keen senses are able to feel the P wave seconds before the S wave arrives."

How come animals like dogs have not been used as a disaster predictor? Gizmodo says no one has been able to pinpoint a consistent animal behavior as basis.