By Admin
April 23, 2015Gamingonline gamephototech newsviral
Is it true that a demonic symbol can be found in Clash of Clans? Is there a mysterious image called Baphomet in the video game's design?


To answer these questions, we tried to capture a screenshot of the popular massively multiplayer online (MMO) video game while in "Village Edit Mode" and got this: 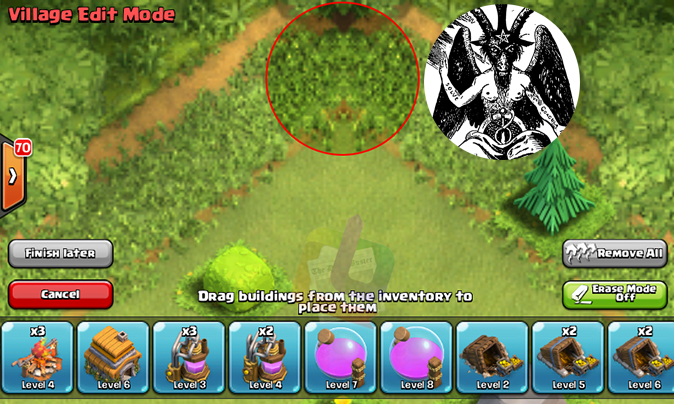 The issue started in September 2014 after a junior member of the forum website of Supercell, the Finland-based company that developed and published the phenomenal video game, posted images purportedly showing the alleged demonic symbol in Clash of Clash.

"Have you noticed some strange designs on the base? Yes, they exist," said BrunoNexoBrazil, who also claimed that this was widely discussed in many Facebook groups.

The gamer described the strange designs he noticed on the base of CoC as "subliminal" or "things that influence your mind in a way that you do not notice."

While many disagreed saying it was only part of his imagination, some associated the mysterious image to Baphomet, an idol for occult and mystical traditions that the Knights Templar and the 19th century Freemasons were accused of worshiping.

According to the Vigilant Citizen, "the symbol is associated with anything relating to occultism, ritual magic, witchcraft, Satanism and esoterica" and "often pops up in popular culture to identify anything occult."

A baffling conclusion on the website says, "In corporate-owned mass media, which has ties with secret societies, the figure of Baphomet appears in the oddest places, often to audiences too young to understand the occult reference."

Regarding the Clash of Clans design, a few went as far as saying that the creators of CoC are members of The Illuminati, an "enlightenment" era secret society said to be founded in the 1700's.

"Central to some of the most widely known and elaborate conspiracy theories," Wikipedia states that "the Illuminati have been depicted as lurking in the shadows and pulling the strings and levers of power in dozens of video games."

In these modern times, many still find it hard to believe that these things existed or still exist.

As for the mysterious image on Clash of Clans, do you wonder if it's really part of the design of CoC or just plain coincidence?