By Admin
April 21, 2015newsscandalshowbiz
The news personality is in the hot seat after a Facebook post titled "The Dark Side of Doris Bigornia" went viral with photos and a video.

A certain Richard Lim posted on the social networking site a lengthy message against the veteran broadcast journalist, claiming that the "Mutya Ng Masa" showed a "conduct unbecoming of a media personality" during the concert of the Irish pop-rock group The Script at the Mall of Asia Arena last Friday. 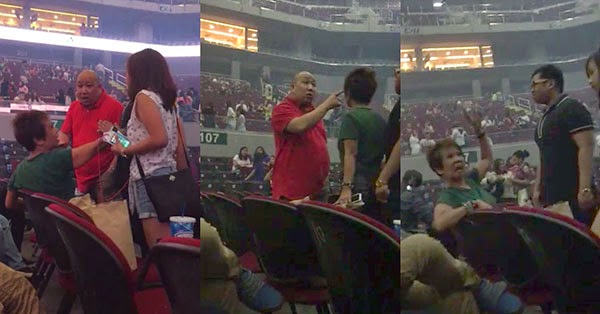 The Dark Side of Doris Bigornia


Last April 17, 2015, I, my wife and youngest son went to Mall of Asia Arena to watch the concert of The Script. We were seated at the VIP section in Row A seat numbers 18, 19 and 20 and it happens to be right at the center of the stage.

For you to see how it all started, I’m attaching this video, which my son took for his file when we arrived, you will notice at the last part of the video wherein Doris and daughter rush forward and evaded the bouncers but since there was so much confusion, he had to stop it. The concert was a seated concert but to my surprise when the artists came out Doris Bigornia and her daughter Nikki Bigornia run straight in front covering our view which initiated the others to rush forward too (since she is a “celebrity” they assumed it was ok). The event bouncers instructed them to go back to their seats explaining to them that it was a seated concert but instead of seating down, she shove off the bouncers and didn’t mind them.

Chaos started with people running in front hitting me and my son. My food and drinks spilled all over the place, being stepped on, bumped and to the point that they were already pushing me and my son out of our seats. Bouncers were able to control the crowd by pushing them back but Doris and her daughter and a few people beside her resisted to leave. I went to her and ask her politely and said “mam favor lang I’m seated right behind you and you are blocking my view” and she didn’t even reply but instead looked over to the other side.

My son was already hyper ventilating because it was starting to get crowded again. Bouncers tried to push Doris and company away but her daughter shouted on top of her voice to the bouncers and said “paalisin nyo muna lahat bago kami umalis dito”. I went back and ask her politely again “mam favor lang nahihilo na ang anak ko baka pwede naman tumabi na kayo para gumaya yung iba” and Doris replied “WALA AKONG PAKI KAHIT MAMATAY SYA DYAN”. I was shocked! I was not expecting that kind of an answer from a so called media personality who runs a show titled “MUTYA NG MASA”. I wanted to keep my cool, so I replied and said “ganyan ba kayong mga taga media, sa TV lang matino, sa totoong buhay eh wala palang pakiaalam.” I was shouting because it was noisy and telling her that as a celebrity she should be the one showing good example, but to my dismay she just didn’t react. As if we were not there.

After the show, people went back to their seats and so did Doris and company. On our way out, we passed in front of them, his son was looking at me with a grin so I confronted them and ask the son, Lorenzo Sungalon, if he had any problem with me and he said why did I keep on looking at them. Doris said “yan ang hirap sa inyo eh, porque media ako iniipit nyo ako tapos youtube nyo agad” you are doing in purpose so that people will take a video of it and post it in youtube I replied by saying “ yun ang problema, media personality ka tapos ikaw pa ang nag pasimuno ng pag harang sa harap kaya tuloy nagayahan lahat” the daughter started shouting and cursing me and I responded by saying “ I’m not talking to you so please shut up”, then her son pushed me and said “f**k off and don’t ever tell my sister to shut up”. I told him "don’t touch me again, you don’t know me and you don’t know what I’m capable of”. He told me again to “f**k off,” I didn’t want to argue anymore, because he didn’t know what transpire earlier between me, her mom and his sister. I know this boy is just a second year college student at De La Salle Taft, because my niece who happens to be in the concert also told me not to mind him because he is just a kid and the same age as my eldest son who happens to study in La Salle too.

A girl whom I met in the concert overheard and saw the whole fiasco asked me if I wanted it viral because she didn’t want this incident to pass without people knowing the truth. I said yes, why not, if it can correct some mistakes media people do to ordinary people like us. She got my name and said she will add me so I can view what she wrote. She was able to take a video when Doris and I were arguing, but, unfortunately, according to her when Doris saw that she was taking video she told her children and they went to her and I am quoting her “I don’t know if you saw it but the daughter hit my phone with her hand while I was recording. I wasn’t able to record it”

After that futile argument, I didn’t see the point of continuing the conversation because she wasn’t apologetic for what she did, the son was telling me to f**k off and the daughter was cursing me in front of thousands of people still inside the Arena as if I was at fault.

I just hope that this will never happen to you and your loved ones wherein these people will take advantage of their position or name. I hope this reaches the management of ABS-CBN because this is conduct unbecoming of a media personality. For those who were able to witness this incident and have a video of it, (I’m sure 1 or 2 have this because everybody was taking videos during the concert) to please post it.

To Doris Bigornia : “Do not do to others what you do not want them to do to you”

Lim attached a video taken by his son during the concert, which allegedly shows the silhouettes of Bigornia and her daughter Nikki running towards the stage shortly after the band appeared.


The confrontation between Lim, Bigornia and her son was captured in the following videos posted by Sid Marko and theAsianparent.com:

Doris Bigornia has issued an official statement to clarify the issue. Read her message on this page.