By Admin
March 31, 2015newsopinionviral
A shopper turned to Facebook to rant against a supermarket "regular" who allegedly made a scene inside the establishment and harrased his wife.


Sonny Salle posted on Saturday, March 29, the following lengthy message narrating the incident that took place at SM Southmall at 4:05 p.m. that same day. The post has gone viral since.

Please note that some words have been filtered as the post contains profanity. 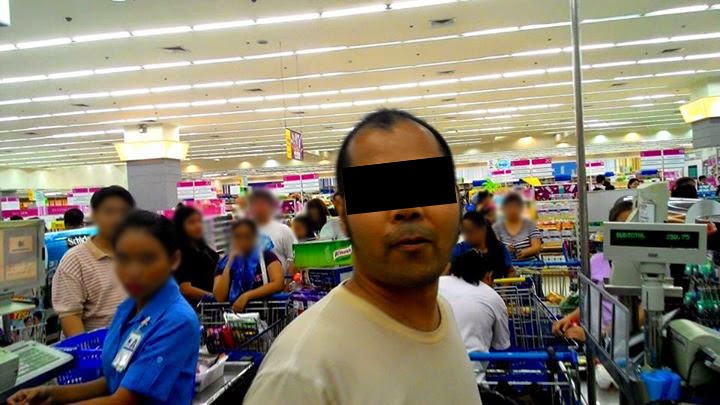 ...4:05pm March 29, 2015. At SM Southmall supermarket. My family was buying groceries, just finished paying for our goods but not yet completely done with our transaction. While my wife was organizing her wallet at the same time the bagger was still placing our bought items inside our shopping bags, this guy who was next in line was pushing/bumping my wife to move forward. My wife called out the person; "kuya, hindi pako tapos". He ignored my wife and kept pushing her forward. This time my wife called him out again on a much louder voice, us thinking she wasnt heard the first time. The guy boasted shouting "SHUT UP!". My wife retorted; "ano ba problema mo?! Hindi pako tapos dito sa transaction ko nanunulak ka na!" This as**ole began raising his voice at my wife saying sh*t in english. I was only there standing holding my 1 year old daughter doing nothing at first because i know my wife can handle herself and would win the verbal fight (i should know! I'm married to her for 12 years). But was also slowly trying to position my stance and was already slowly placing my 1 year old daughter to my 9 year old son in case the issue escalates into a physical brawl. The commotion already caught the attention of other shoppers and some security guards advicing us to let him be as he is a "regular" in the supermarket. My wife decided to walk away instead telling me how such an as**ole the bald guy was. I was already pissed off at that time but maintained my cool, as there was no physical interaction happened. If there was, believe me, i will join the fight as any husband would. I was asking the SM security guard if he knew who the guy was, because when he advised us to let it pass as he is a "regular", seemed he is known for being a j*rk in the establishment. The guard just responded; "regular po sya dito sir, pabayaan na lang po natin.", my wife responded "eh ano ngayon?". My wife turned to me and said; "Hon, kunan mo nga ng picture at isumbong natin sa SM office", the guard responded; "mam, bawal po dito mag take ng picture." I then thought, with the advancement of smartphones in the world today, with thousands of selfies inside SM Southmall and pictures with families taken during any SM Southmall event, they suddenly changed their policy on taking puctures? I then handed my daughter to my wife, pulled out my camera phone from my pocket, approached the bald guy and snapped a picture as you see here. I walked away when he started shouting again; "why are you taking my picture?! What are you going to do with it huh?! Answer me you 'p*ta'!" Repeatedly as the verbal abuse went on while i was walking away. I realized that nobody should take such verbal abuse from this tarantado, so i then paused and faced him shouting back; "kababaeng tao pinapatulan mo asawa ko, g*go ka pala eh! Hinaharass mo asawa ko na wala namam ginagawa sayo!" He started walking towards me, probably to attack me physically when another security guard held him and politely pushing him back to the cashier. With all the things he was saying...and cursing, i just decided that this will go nowhere. Besides, there were hundreds of witnesses already, and many saw the whole thing from the start how the bald as**ole harassed my wife. I just held my middle finger high enough above my head and calmly said; "F**K YOU!" Repeatedly and slowly to ensure he would read my lips from a distance from all his verbal abuse he was still shouting that time. He then added in his sentences while still pointing at me; "ORAL DEFAMATION! ORAL DEFAMATION!" The nerve of this as**ole, as if i was the one who started cursing. I just responded back to him loudly while my middle finger was still up there; "you're a big bully as**ole with nothing to prove kasi maliit ang ti*i mo!" Many witnesses laughed out loud in favor of my remark. That's where i knew i won the fight, and just walked away pushing our grocery cart, and went home.

NOTE TO THE BALD AS***OLE JERK: if this post reaches you, send me a pm and let me know how you would like to move forward, 'mano a mano' if that is what you choose. I am more determined to face off with you at any cost since you harassed my wife who is the sole 'tahanan' of my small family. My close friends and family knows, or any people for that matter, i can personally take such abuse and i would probably not engage at that person, but my wife is family, and family matters. You are probably a resident of Las Piñas, so that wont be a problem for your supposed 'big t*ti'. You know we did nothing of any kind to abuse you. If you were pissed off because the line in that cashier lane was long and slow, raise it up to the SM management instead. Not to my wife you coward! If you dont send me a message, that will be the end of it and we can forget all of this, at least we know who you really are.

NOTE TO THE SM SECURITY GUARD: dont ever tell anyone that any person is a "regular" of the establishment, it does not give him or her the right to be untouchable. All my home appliances, food, my kid's school supplies, gadgets and clothes...heck...even the underwear i was wearing that time was bought from SM Southmall's supermarket, department store and other various 3rd party shops. I probably earned at an approximate almost 50,000 points or maybe less in my SM prestige card over a decade. AND i have not verbally abused your staff or did of any kind while i was a patron since 1994. SHAME ON YOU!

"Seems he is really after bullying women, people have already sent me messages (mostly women), some witnessed bullying other people, some experienced first hand," Salle said in a comment.

If you were in his shoe, what would you do?