By Admin
March 25, 2015newsshowbiz
Model and realtor Rey Pamaran is suing actress Melissa Mendez for slander in connection with their altercation on a Cebu Pacific flight.


According to GMA News, he filed the criminal complaint of slander by deed with damages amounting to P3 Million before the Pasay City prosecutors' office on Wednesday, March 25. 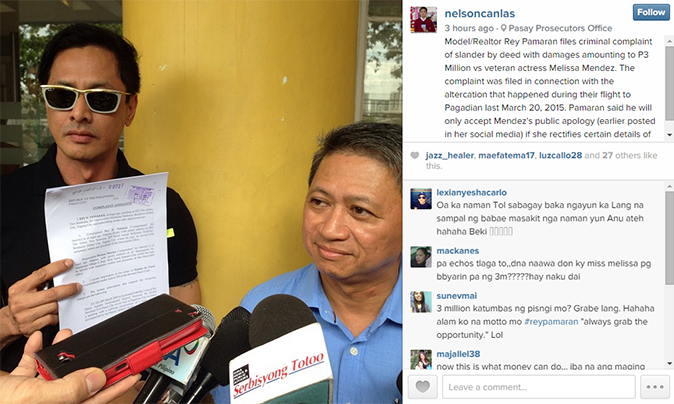 Model/Realtor Rey Pamaran files criminal complaint of slander by deed with damages amounting to P3 Million vs veteran actress Melissa Mendez. The complaint was filed in connection with the altercation that happened during their flight to Pagadian last March 20, 2015. Pamaran said he will only accept Mendez's public apology (earlier posted in her social media) if she rectifies certain details of her version of the incident. @gmanews

It can be recalled that Mendez was offloaded from a plane bound for Pagadian City last March 20 due to her unruly behavior. The actress narrated her side of the story in an interview on TV to defend herself.

Pamaran posted an open letter to Mendez last Sunday, March 22, saying he will not pursue filing a case against her if she would tell nothing but the truth and issue a public apology.

"In light of the recent incident involving me and Mr. Pamaran, I would just like to simply apologize for my untoward action and move on from this. This incident has caused a lot of pain and trouble to my family, as well as to the other party involved. I am owning up to my mistake," Mendez said.

"No matter what the reason might be, I had no right to physically hurt Mr. Pamaran. Again, my deepest apologies to Mr. Pamaran and to all people affected by this," she added.

"Reading the response of the supposedly 'public apology' of Ms. Mendez, I immediately made up my mind to pursue my cases against her," Pamaran said in a Facebook post. "I was hoping for a more heartfelt reply, where she would not only apologize but also own up to the lies that she said on TV to defend herself while destroying my reputation."

The realtor gave Mendez another chance to "clear EVERYTHING IN DETAIL, including all the lies that she said about the incident," but he wants her to say it on television.

"My lawyer, Atty. Fortun, will be filing the cases tomorrow so I guess that's about the time that she has left. I think this is not too much to ask," he said on Tuesday. "And please do it on TV, because that is where you destroyed my name. Making statements thru social media just adds insult to injury."

Mendez, apparently, did not apologize on TV.