Pacquiao vs Mayweather to air on ABS-CBN, GMA, TV5
🔍

Pacquiao vs Mayweather to air on ABS-CBN, GMA, TV5

By Coolbuster
March 26, 2015boxingnewssports
Historic it is! For the first time in Philippine TV, three competing networks unite to air the Manny Pacquiao vs. Floyd Mayweather, Jr. bout.


ABS-CBN, GMA-7 and TV5 will broadcast the mega-fight of the century simultaneously in partnership with Solar Sports, which holds the local broadcast rights for Pacquiao’s fights, ABS-CBN News reported (watch the video of the announcement). 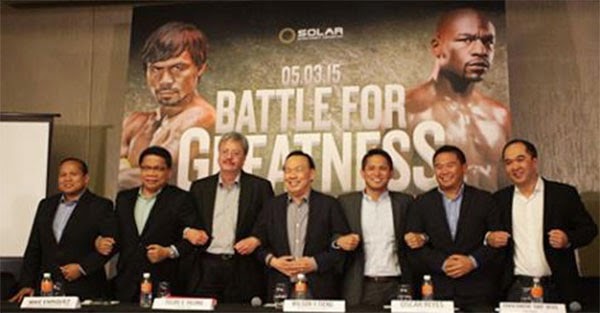 The mega-bout between Manny Pacquiao and Floyd Mayweather Jr. will be broadcast on free TV simultaneously on ABS-CBN, GMA 7 and TV5.

The match will be aired on free television on a slightly delayed basis while Solar Sports will show the fight live via Cignal and Sky Cable pay-per-view (PPV).

On the radio, GMA will broadcast the match live through dzBB. The bout can also be viewed in 100 SM Cinemas nationwide, according to the report.

During the joint press conference on Thursday, Pacquiao thanked the three TV networks and Solar Entertainment for the collaboration, saying via Skype that it is the Filipino people who will truly benefit from it.