By Major Tom
March 05, 2015newstrending topic
More than 70 years ago, the battleship Musashi of the Imperial Japanese Army went down the deep waters of the Sibuyan Sea, an area that disconnects the Visayas region from Luzon.

Now, it has been found.


In a recent discovery, Microsoft co-founder Paul Allen, posted a photo dated March 03, 2015 on his Twitter account that his 'MY Octopus' has found the World War II Battleship Musashi 1 kilometer deep off the Sibuyan Sea, which is bounded by Panay island to the south, Masbate to the eastern side, by Mindoro to the west and to the northern side by Marinduque. 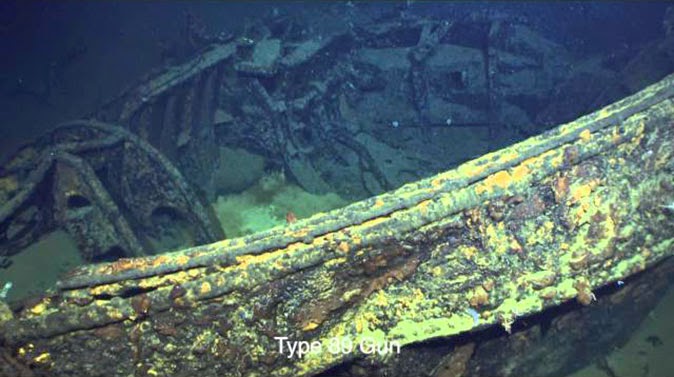 The first photo released is of that of the ship's anchor followed by a valve that confirms it is of Japanese origin.

As posted on Paul Allen's website, the exploration team led by the billionaire himself also presented the world with the first undersea video clips of the discovery.


This great find led some to exclaim that Allen, who also has interests in space exploration, has beaten James Cameron in locating the ill-fated seacraft.

The Battleship Musashi, discovered under PH sea, has great significance for the Philippines and to history, in general. "This marks an important milestone in the annals of World War II naval history", according to a report via www.paulallen.com. It added that the Musashi is the sister ship to the Yamato, the heaviest and most powerfully armed battleships ever constructed.

We also join Paul Allen and the world in salute to the fallen crew, RIP crew of Musashi with approximately 1,023 who were lost at sea during the Battle of Leyte Gulf, which is regarded as the biggest naval encounter of the second World War.

It was on October 24, 1944, when American warplanes sank the Musashi en route to defeating the Japanese together with Australian forces, Yahoo! Celebrity Philippines reported.