Strange-looking creature caught on video: Is this a Sigbin?

By Admin
February 05, 2015newsvideo
A video that captured a strange-looking creature wandering in a plantation made rounds on social media very recently. Is this a Sigbin?

The Sigbin or Sigben is a creature in Philippine mythology said to come out at night to suck the blood of victims from their shadows. It is said to walk backwards with its head lowered between its hind legs, and to have the ability to become invisible to other creatures, especially humans.

It resembles a hornless goat, but has very large ears which it can clap like a pair of hands and a long, flexible tail that can be used as a whip.

The Sigbin is said to emit a nauseating odor.

The myth is popularly known in Visayas and Mindanao. 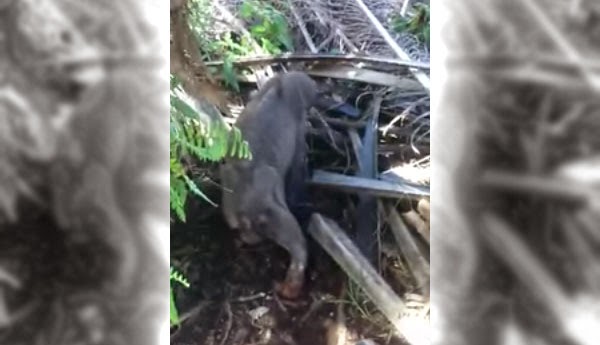 Many netizens on Facebook thought that the strange-looking creature is a Sigbin. However, a story on The Straits Times tells otherwise.

Environmentalists say the animal spotted by plantation workers in the Malaysian state of Sarawak is a rare Malayan sun bear.

As seen in the video, the animal crawled in a grassy, swampy area. It had lost its fur and tail, and looked very ill.

Some workers in the plantation allegedly maltreated the animal.