By Admin
February 12, 2015news
The Mamasapano Massacre video uploader is "heartless," according to a Malacañang official who wants the video taken down from social media.


In a press briefing on Wednesday, presidential spokesperson Edwin Lacierda told the owner to remove the video showing the brutal slaying of a Special Action Force (SAF) commando who was fighting for his life.

"Whoever uploaded the video is a heartless fellow," he said. "If you still have some humanity left in your soul, we ask you to take it down."

The slain police officer in the video was identified as PO1 Joseph Sagonoy. Besides him being shot to death twice at close range, the video also shows looting of battle gears from several lifeless men in uniform. 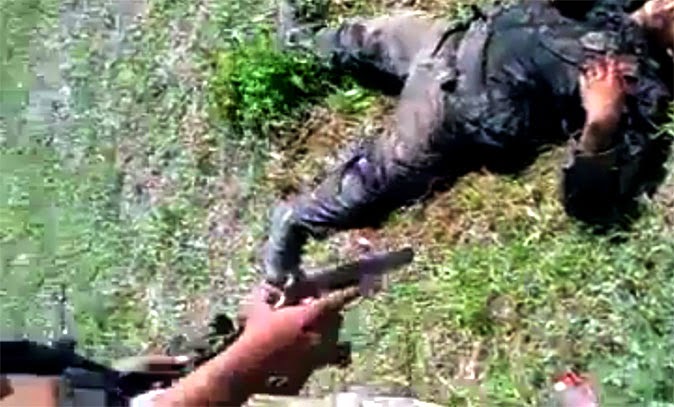 President Benigno Aquino III has been earning the ire of netizens since the so-called Mamasapano Massacre occured last January 25 in Maguindanao. The public backlash against the Bangsamoro Basic Law is apparently becoming stronger.

Malacañang has this to say:

Lacierda's statement drew negative reactions from the followers of a certain Even Demata, whose Facebook page is where the viral video was first seen, apparently.

Facebook user Ej said: "Why would they want it Removed?? It's an Evidence for Christ sake! It just only proves that what Happened in Mamasapano was NOT A MISENCOUNTER but a MASSACRE! And it just shows what kind of People the Government is Negotiating peace with. Savages and uncivilized."

One KC argued: "I think the main reason WHY they wanted the video to be taken down from social media is because of its graphical content and brutality. Viewers are not just adults but also, there are young ones who needed to be protected. It may be taken down BUT the senate of course has produced and might possibly have a copy out of it."

In a separate post, EJ said: "Well I've got good news for you guys. Seems that almost all of the videos regarding mamasapano massacre have now been removed from all pages. Looks like the palace is really hell bent on removing them."

In the comments section of Rappler's report on the issue, more netizens have expressed their thoughts on Lacierda's statement.

Ipe commented: "Good Lord, why do they continue to embarrassed themselves?! As if the massacre of 44 SAF is not enough. You want the truth but your actions speaks otherwise because that video may shed some light. #WrongSideOfTheFenceMrPresident"

Was it right to call the Mamasapano Massacre video uploader heartless? Shouldn't Malacañang condemn the barbaric act instead?