Jam Sebastian not dead but in critical condition

By Admin
February 27, 2015newsshowbizvideo
Jam Sebastian, one-half of YouTube sensation Jamich is not dead contrary to false reports on social media, but he is in critical condition. 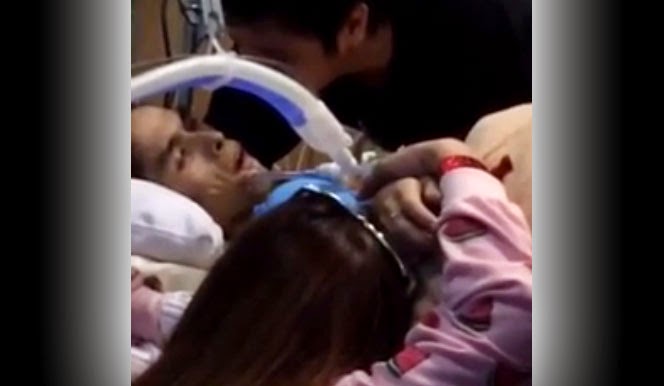 The 28-year-old internet star, who has been battling stage 4 lung cancer since March of 2014, is undergoing chemotherapy treatment at St. Luke's Global City.

His condition is getting critical, according to a Facebook post by Christopher Joseph Liggayu, the father of Sebastian's fiancée Paolinne Michelle, more popularly known as Mich.

Friends, our Jam is holding on for dear life but he is in life support or a ventilator."

Jam and Mich have been engaged since May last year and the cancer-stricken celebrity wanted to marry her someday.

But her father posted something meaningful for Jam, saying:

Earlier this month, Jam told his family to consider euthanasia to end his suffering but his mother, Maricar, who said her son wanted to quit as he is getting very weak and exhausted, refused his wish for mercy killing.

Mich, meanwhile, belied rumors of Jam's passing that circulated on social media sites. In an Instagram post, she clarified that her fiancé is alive.

The online star stated that Jam is still in the hospital resting. She asked their fans to keep praying.

Last February 14, Valentine's Day, Mich shared that Jam's condition has improved. She surprised the cancer victim with a flash mob which he watched via Skype.

Mikee Agustin, the girlfriend of Jam's brother Yexel, posted Thursday on Facebook a video showing the Sebastian brothers and Mich.


Post by Mikee Agustin.
In an FB post today, Mikee said Jam woke up and wrote "I love you all."