P50M smuggled footwear destroyed: BOC should have given those to the poor

By Admin
February 25, 2015newsopinion
Some P50 million worth of smuggled footwear were destroyed by the Bureau of Customs. Netizens think the BOC should have given those to the poor.


The fake products from China, consisting of 150,000 pairs of shoes and slippers, were shredded at the Port of Manila. The condemnation was witnessed by representatives from the legitimate manufacturers of branded products. 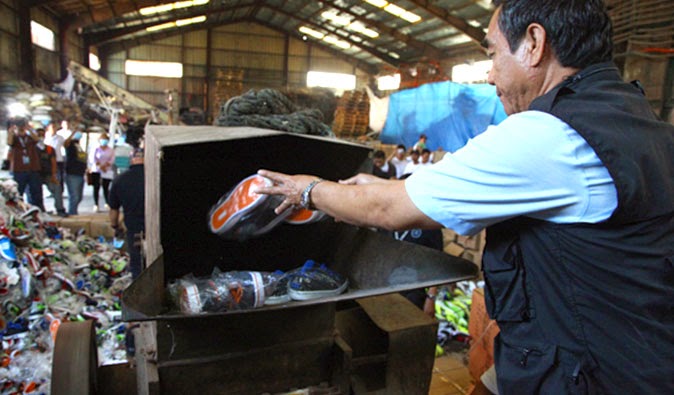 Customs Commissioner John Sevilla, who urged the public not to buy fake products, said the counterfeit items were confiscated from Warehouse 4 in Olivarez Compound, Parañaque City, after the owner failed to produce proof of payment of duties and taxes.

He said the BOC will not allow the Philippines to be a dumping ground of counterfeit goods. The agency aims to ensure that manufacturers and distributors of genuine brands are protected.

The BOC’s Run-After-The-Smugglers (RATS) continues to build up cases against importers and brokers involved in counterfeit smuggling, Sevilla added.

It would have been a better decision if they donated the shoes and slippers to orphanage centers across the country.