By Coolbuster
February 13, 2015Entertainmentvideoviral
A BuzzFeed video, which shows US president Barack Obama using a monopod stick in his selfies and drawing his First Lady, has gone viral.


Titled "President Obama made a BuzzFeed video: Things Everybody Does But Doesn't Talk About," the internet news media company explained that the video is part of a campaign to promote the US government's health care program.

"How did we get Obama to use a selfie stick? Oh, because he wants you to go to https://www.healthcare.gov," BuzzFeed posted on its Facebook page. 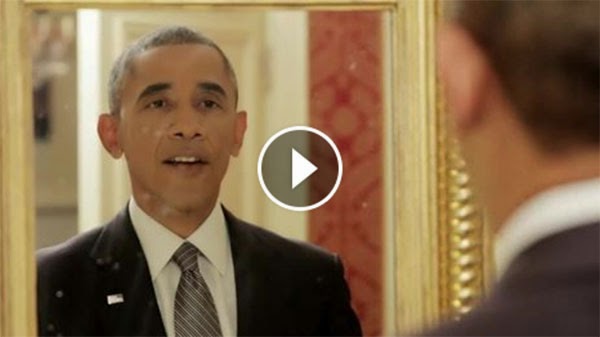 Post by BuzzFeed Video.
The video has drawn not only negative feedback but funny and positive comments as well.

Adrian Carrasquillo: "Whoever is down to clean Obama's mirror can get a job in the White House."

Ryan Lake: "This was kind of adorable, especially the drawing of his wife."

Adrienne CT: "Can I live? lmao"

Teri A. Jacobs: "It's good to see even the President has a dirty mirror, and a great sense of humor."

Emma Leigh Ann Swendsen: "Hold on let me get this right. If the President is attempting to do his job people hate him and Congress tries to block him. BUT If the president tries to be chill and do a silly video with BuzzFeed people still hate him and say he isn't doing his job? Damn guess I missed the logic train."

Maritza Ruiz: "You are stupid as hell if you believe that all the fuck ups in your life are because of the president (any of them). You have a crappy life because you settle for it. Grow up."

April Torres: "I'm in love with the fact that a world leader can be so down to earth. Who cares if he's the president and your views on him. At the end of the day we are all humans. Put your opinions behind your for a few minutes and enjoy this adorable video."

Do you wish the President of the Philippines would be as cool as Obama?