By Coolbuster
January 28, 2015news
A resident of Mallig town in Isabela, Philippines, was very shocked to have found out that the snake he killed inside their house has feet.

In an interview with ABS-CBN News aired Wednesday, January 28, on the morning show Umagang Kay Ganda (UKG), the man said at first he thought it was only a rope, but realized it was a snake when it started moving. He got the snake cornered and killed when it hid under a carton.

Post by Umagang KayGanda (Official Page).
According to a specialist, genetic mutation may have caused the snake to have feet. It's not the first time that such abnormality was heard though.

A 2009 report on The Telegraph says a snake with feet was found by a 66-year-old woman in China. Dean Qiongxiu reportedly said she discovered the reptile clinging to the wall of her bedroom.


The dead snake with feet in Isabela has been preserved as a lucky token, although some people in the neighborhood believe that its occurrence means that the "end of the world" is coming. 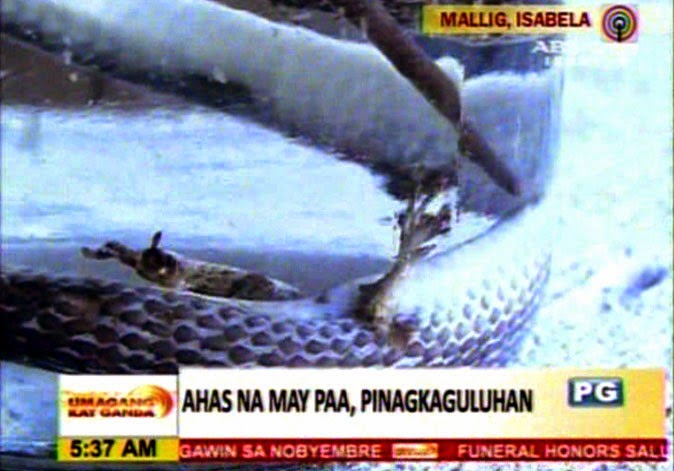