By Coolbuster
January 23, 2015Entertainment
The scandal video allegedly involving singer-actress Sarah Geronimo and an unidentified man that's making rounds on social media is a hoax.
A message containing an altered photo that shows a woman who looks like the pop star having sex on a couch is spreading like wildfire across Facebook timelines today. 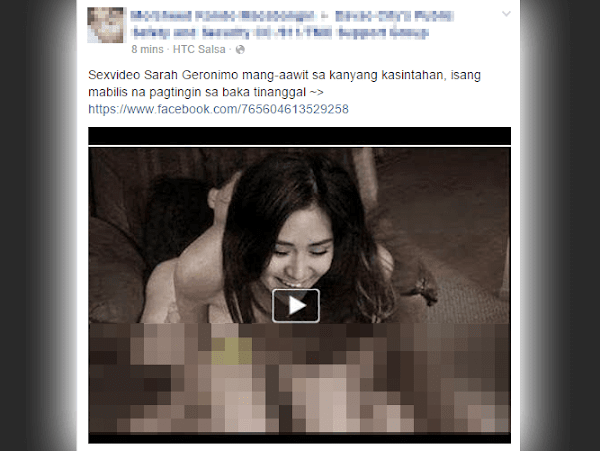 Once clicked, the image link redirects to either a suspicious app or a phishing site. Scammers are using the same method applied on the fake Coleen Garcia and Piolo Pascual scandal videos in this one.

"Clickjacking," according to International Business Times, "is a technique used to trick online users into clicking hidden links and buttons."

"Scammers exploit the security weakness in web browsers to allow the layering and hiding of pages," the website explained.

"As a result, users often click on the play button of a video they thought was posted by a Facebook friend. However, they don't know they are clicking on a hidden link. Users will then be redirected to other pages that ask for personal information. These pages often encourage users to join a 'competition.'"

"If information is entered, victims will be vulnerable to malicious software. Scammers will use their profiles to spread the scam online," the site added.

If you encounter a message with the fake Sarah Geronimo scandal video, report it as spam and immediately notify your FB friend whose account might have been hacked.

We will never get tired of posting reports like this as long as there are unscrupulous individuals and groups out there who victimize innocent people.

Just a reminder to everyone, don't ever try to click suspicious images and links.