Raped OFW from Bohol Jumps Off Building in Kuwait

By Admin
January 11, 2015newsOFW
An overseas Filipino worker from Bohol jumped off a building in Kuwait after she was allegedly raped by the brother of her Jordanian employer.

On Facebook, netizen Bebs Senturias posted a video of the victim lying in a hospital bed. She identified her as Monica Baltron.

The OFW, who has been working for six months in the Arab country, was brought to the Mubarak Al-Kabeer Hospital after jumping off the fifth floor of a building. 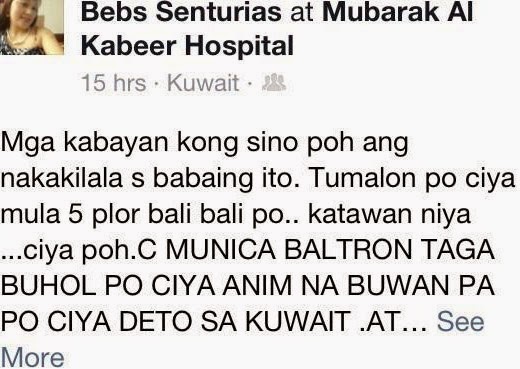 Atty. Raul Dado, Consul General of the Philippine Embassy in Kuwait, posted an update about the case on his Facebook account saying that Baltron is currently recuperating.

"UPDATE ON THIS CASE: OUR HOSPITAL TEAM LED BY VICE CONSUL SHIENA TESORERO AND ATN CHIEF MON NERIDA MET WITH THE DOCTORS AND HOSPITAL STAFF AT MUBARAK. The patient is recovering. She cannot be seen by visitors yet but the embassy monitors her. Updates will be made immediately. Legal action also follows," he said.