By Admin
January 27, 2015newsopinion
This recent viral Facebook post once again proves the notion that Pope Francis is well-loved and highly-respected even by non-Catholics.

A Pastor's Reflections on Pope Francis
By: Rev. Arnel Tan 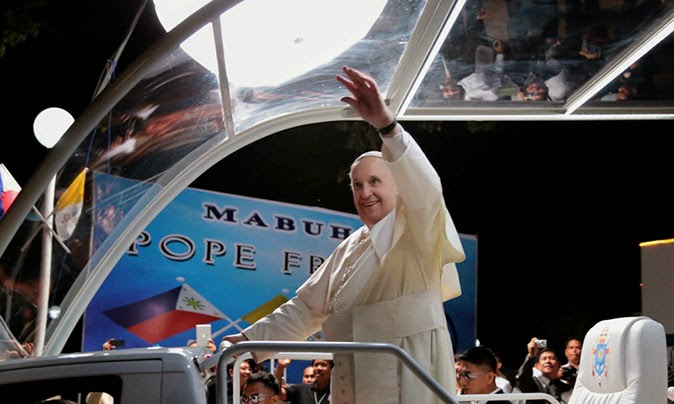 Since Pope Francis took his office as the head of the Roman Catholic church he became to me a very interesting person. His radical views on integrity and accountability, his respect to non Catholics, his desire to be powerless made me really admire him. His life of grace and boldness to cleanse his own yard made me look at myself inside.

I can't help but see the spirit of the Protestant reformers in him, maybe a Protestant Jesuit. Ooops. I'm sure that as a Southern Baptist minister we have many non negotiable theological standards that can't concur with the Catholic faith. Pope Francis disarmed my dogmatic stand by his grace. I can only say from afar I wish i have that authenticity of a beautiful blend of humor and humility.

His admonition to the Catholic Bishops and Priests to be simple servants are equally needed among the ranks of autonomous Protestant ministers. His homily, though not as bombastic as a minister would preach, made me see Christ outside my theological walls. His call for rest and compassion and his warnings against corruption both in politics and religion made me rethink of my role in this society.

At the end of the day I can only stand confused and inquisitive what really is the meaning of the testimony of those who saw him and said they felt peace and their problems gone. I restrain myself from judging.... while deep in me is a sincere longing that if the sight of the Pope can bring such joy and peace, wow it should be injustice to even compare the joy and peace that one can experience when one chooses to LOOK TO JESUS!

It also left a deep conviction to me when the Pope did not even attempt to answer the little girl's question about why God allows children to suffer. His humility to admit that He has no answer became to me an answer to my evangelical pride. We still do not know a lot of things. Thank God for spiritual leaders who admits that and model to us how to cry for others.

Well the Pope went back to Rome already, but his sincere quest for powerlessness became a rebuke to my secret addiction to power. After seeing how the mass was, I silently appreciated how the evangelicals simplified everything in our services. To me the messages I preached, this Pope sincerely applied. At the end of the day God is the judge. With grateful heart. I say thank you Pope Francis for leading a Baptist Pastor to reflect on my relationship with Christ.

Glad you came to our country."

Posted on January 23 by the Davao Chinese Baptist Church, the article has garnered 161 likes and 95 shares on Facebook as of 10 p.m. Tuesday. It also received over 2,000 recommendations on the SunStar Davao website.