By Coolbuster
January 12, 2015newsvideoviral
A viral video of an arrogant driver who provoked other motorists on the road with what he calls "The Beast" driving mode enraged netizens.

Tito T. Cosejo Jr. bragged that he can outsmart others in a tutorial video that shows him talking about tailgating, swerving, changing lanes abruptly, and deliberately making other motorists annoyed if they won't give way.

While filming, he encountered two men who got irritated with his careless and irresponsible way of driving. 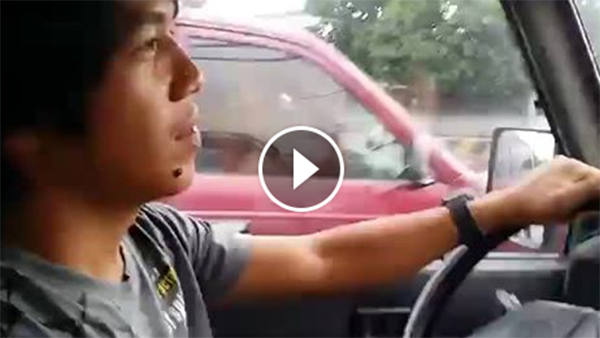 Using his social media account, which is now deactivated, Cosejo made a public apology and said he learned his lesson the hard way.

"I take full responsibility for my actions that day. It was a huge lapse in judgement, and I'd like to apologize to anyone and everyone affected by my carelessness," he posted.

"The Beast" added that he is ready to face the consequences of his actions. However, a commenter asked how he can be held liable if he is currently out of the country and no one has filed a formal complaint against him.


Taking the issue as a cue, netizens made several suggestions for the authorities to correct unsafe driving habits similar to what Cosejo manifested, which include among others increased police enforcement, more frequent apprehension of traffic violators, and higher penalties.