"We have dismissed Mr Ello Ed Mundsel Bello from our Hospital immediately for his offensive online comments made in 2014 while in our Hospital’s employment," the Tan Tock Seng Hospital (TTSH) posted Friday, January 9, on its Facebook page.

Four days before the announcement, TTSH said it received feedback from concerned members of the public on inflammatory online posts allegedly made by one of its nursing staff.


"This is a serious matter. We are a public healthcare institution and we expect our staff to be respectful and professional. We do not condone behaviours or comments that are irresponsible and offensive, and will take the appropriate disciplinary action where necessary," TTSH posted last January 5.

Bello, who joined the hospital in October 2014 and had been under probation, made posts "that touched on race and religion" which TTSH enumerated as "an offensive Facebook comment on Singapore" and "two offensive comments on religion on his Google Plus page." 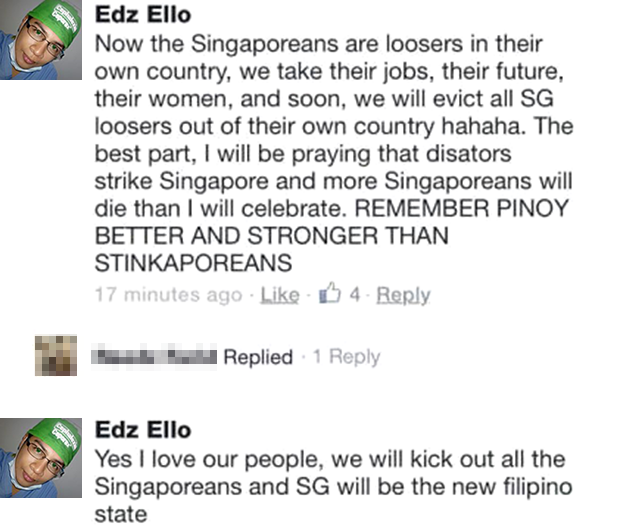 Bello confirmed that he made these three posts last year, TTSH said in its statement.

"These comments were highly irresponsible and offensive to Singapore and religion. They have distressed members of the public and our hospital staff. His conduct goes against our staff values of respect, professionalism and social responsibility," the hospital explained. "As a public healthcare institution, we take a very serious view and have zero tolerance on conduct that is offensive and detrimental to multi-cultural harmony in Singapore."

"Our decision for dismissal is independent of the ongoing police investigation of the more recent alleged posts made in January 2015. We are still in full cooperation with the police on the alleged comments."

Amid the allegations, some netizens believe that the overseas Filipino worker's FB account has been compromised.

"Dear all, the staff concerned is one of our nurses. He has reported to the police that his Facebook account has been hacked. We are cooperating with the police on the investigation," TTSH posted on January 4.

Angry Singaporeans created a Facebook group for those who want to join the petition to have Bello deported to the Philippines.

"Singapore is not longer safe as a Filipino Staff Ed Mundsel Bello Ello of Tan Tock Seng Hospital openly said in his FB that he wants to kill more [Singaporeans]," a statement on the group's About page read. "Deportation is the only way to keep this potential murderer from killing [Singaporeans] during the course of his work and outside his office hours."