By Admin
December 14, 2014newssocial mediavideo
With the help of real-life "Big Brother" cameras, the Davao City police intercepted a gun-toting suspect who fled using his multicab.

PSSCC's TOC/IOC cctv operators caught on camera a suspect of a Gun - toting case at 1:30 pm yesterday , December,13 2014, reported to our 911 calling center by the victim. The lone suspect on board a white multicab bearing plate nr KCZ-142 was first sighted traversing along Quirino / Pichon Rd. and was finally intercepted along Sta. Ana Ave. by DCPO's Mobile nr. 15. The integrated operations of PSSCC's line units and Davao City Police Office made another spectacular accomplishment in making the city safe and secured...Thanks TOC and IOC cctv IT operators

The gun toting scene was not seen by our cameras but the victim called up our 911 calling center and reported the matter to our PSSCC's Intelligent Operations Center (IOC) and Traffic Operations Center (TOC) CCTV operators to locate the whereabouts of the suspect on board his vehicle. The case is now with the police...Thanks

Netizens praised Davao policemen and Villaroman's team for the accomplishment.

Now you know where is the real "Big Brother" from. 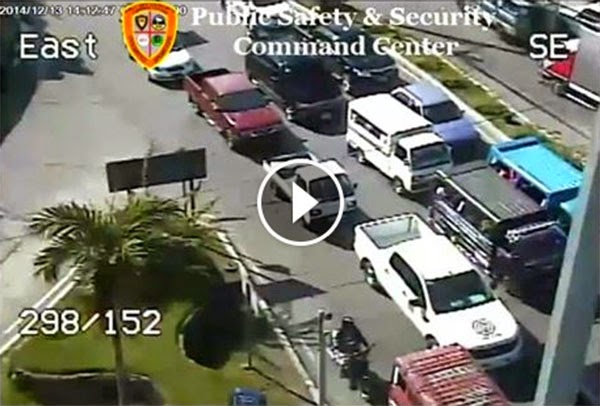