By Admin
November 21, 2014foodnewsphotosocial mediaviral
[Updated at 3:30 p.m.] A photo showing an alleged worm found inside a cheeseburger bought from a Davao branch of fast food giant McDonald's has gone viral on Facebook. 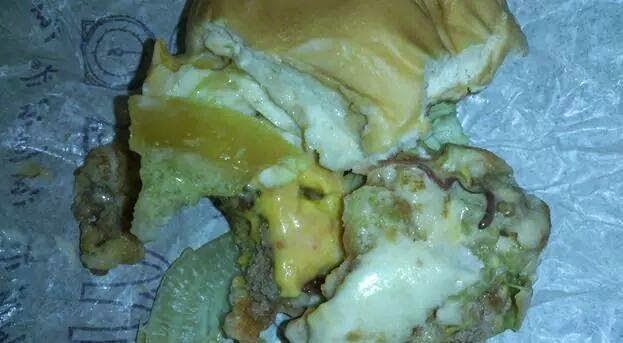 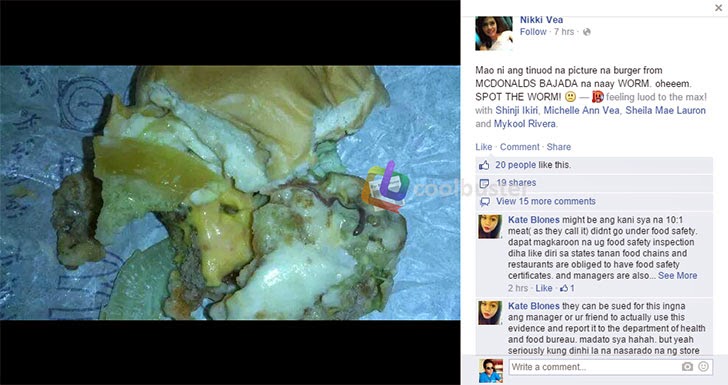 In one of her comments, the uploader said in local dialect that it was her workmate who ate the cheeseburger, adding that they already notified the store management about the extra ingredient, but there was allegedly no action from McDo Bajada.

The photo garnered a few likes and shares on Nikki's account and many more on the Facebook page of Davao City's Public Safety and Security CC/911/TMC Support Group where it was shared Friday morning.

Some commenters said the unwanted burger component looks like an earthworm.

Coolbuster.net tried to reach McDonald's via its social media arm. Here's what the company has to say:

The incident that took place last November 14 in McDonald’s Bajada [Davao City] involving an alleged foreign object in one of our products is currently being investigated.

The restaurant is undergoing a series of internal and third party food safety and sanitation checks to ensure that all our products and the environment where they are prepared and cooked, meet our global standards of quality, safety, and cleanliness.

We implement strict guidelines and work closely with all our suppliers and partners in following stringent protocols.

Rest assured, McDonald’s is committed to ensuring that all necessary measures are taken to serve great tasting, safe, and quality food. 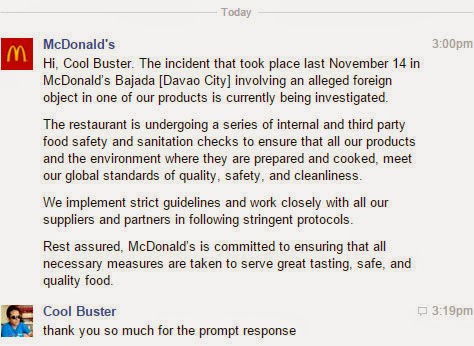