By Admin
November 04, 2014newsvideo
A CCTv video has captured a salisi gang victimizing a woman inside a mall bakeshop in Davao City during the All Saints' Day over the weekend.

According to a certain Ana Abrina Lupiba, who posted the video on Facebook, the incident happened inside the NCCC Mall bakeshop last Saturday, November 1. She said a group of 4 to 5 people stole the wallet of the victim, identified only as Siony, her mother.

As seen in the video, a woman wearing a t-shirt with stripes distracts the victim's attention while a pickpocket takes the wallet from her shoulder bag. The group quickly left after carrying out their motive.

On the Facebook page of Davao's Public Safety and Security Support Group, the victim's daughter asked for assistance in identifying the criminals. 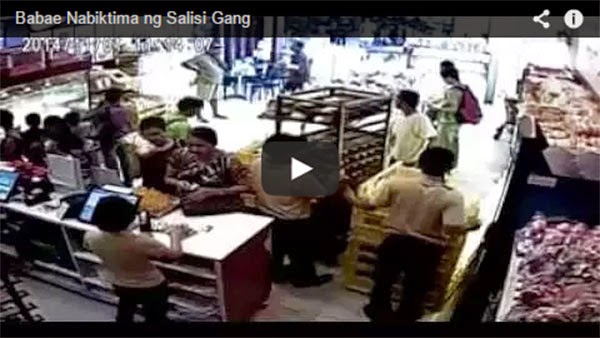