In an interview on ABS-CBN's morning show Umagang Kay Ganda, Tallado denied that she and her friend, Darlene Francisco, were kidnapped in Camarines Sur.

The 43-year-old said she escaped from her husband for fear that the governor might kill her after she discovered a "sex video" showing him and his alleged mistress.

She said the governor also accused her of posting a scandalous photo of his 28-year-old "mistress" on Facebook. During a confrontation on Wednesday last week, she allegedly saw her husband with a gun tucked in his back.

Her legal counsel, Atty. Lorna Kapunan, told media that the governor confiscated his wife's gadgets and destroyed her laptop using the gun.

On October 17, Tallado left her home "for fear of her life." She and Francisco abandoned their vehicle, a black Toyota Fortuner, in Lupi town in CamSur and took a motorcycle in going to Naga City where they checked-in at a motel, Kapunan reportedly said.

The lawyer added that Mrs. Tallado bought a second-hand car and used it to drive to Metro Manila.

Governor Tallado reportedly organized a task force to search for his wife and Francisco.

Francisco, an IT expert, said she saw the scandal photo on Facebook, which was later removed, and made a clarification that she did not upload the private picture of the governor's alleged mistress. 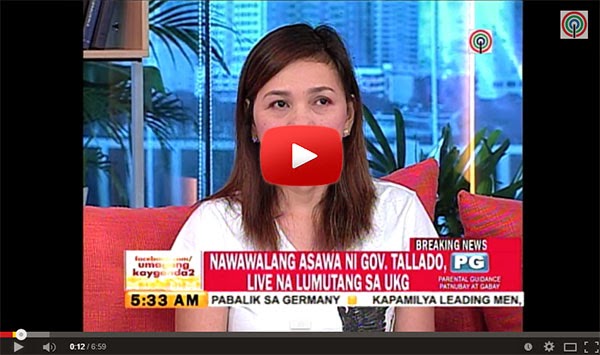