The duo did a two-part performance for the Kapamilya program's 5th anniversary special. They were joined by the popular doble-kara impersonator of the late Philippine cinema icons "Da King" Fernando Poe Jr. and Romy Diaz.

First, Anne and Coleen recorded a variety of vocal and intrumental sound and reused it as intruments that served as accompaniment as they sang the chorus of the noontime show's theme song.

After which they performed aerial acrobatics while hanging from a special fabric without any safety gear or harness. The jaw-dropping highlight made their co-hosts, celebrity judges, the live studio audience, and televiewers speechless.


"Magpasikat Week" is an annual competition featuring the "It's Showtime" hosts. The winning team gets to donate their cash prize to a chosen charity. Many expect that the Anne and Coleen tandem will be declared as this year's winner. 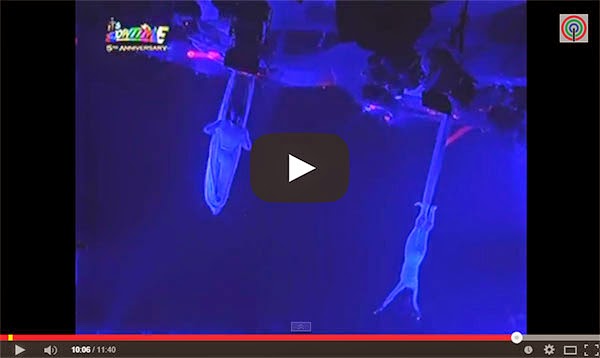