By Admin
October 17, 2014Entertainmentmusicnewsvideo
ABS-CBN, the Kapamilya network, has unveiled the lyrics video of its Christmas Station ID for 2014 titled "Thank You, Ang Babait Ninyo."


Every year, Filipinos in the country and all over the world anticipate ABS-CBN’s Christmas Station ID as it is already part of the Christmas tradition.

This year, the broadcast giant is once again paying homage to the goodness of Filipinos with "Thank You Ang Babait Ninyo" performed by The Voice Kids Top 4 Lyca Gairanod, Darren Espanto, Juan Karlos Labajo, and Darlene Vibares.


The song, written by Star ng Pasko composer Robert Labayen together with Love Rose de Leon and Lloyd Corpuz and arranged by Amber and Marcus Davis, is "a meaningful take on the usual Filipino Christmas carol," the network said. "It centers on gratitude that are innate in every Filipino."

According to ABS-CBN, listening to the song "gives an overwhelming feeling of appreciation to the people who have touched our lives and the blessings that we have received."

The ABS-CBN Christmas Station ID 2014 music video featuring the Kapamilya stars will be launched in November. 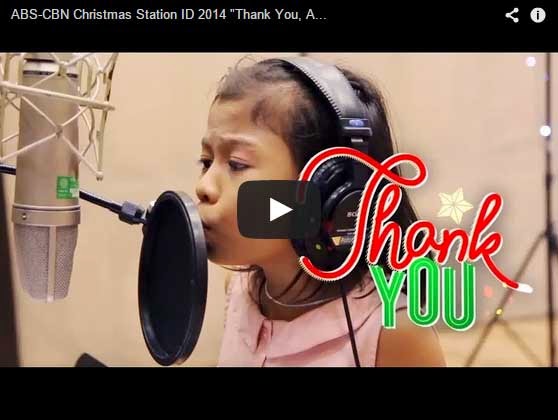