By Coolbuster
September 23, 2014newstrending topic
SM Mall has pulled out stocks of t-shirts with the print "It's Not Rape, It's A Snuggle With A Struggle" on it that sparked outrage online.

A snapshot of the offensive rape-themed t-shirt went viral on social media after writer and poet Karen Kunawicz uploaded it on Monday, September 22. 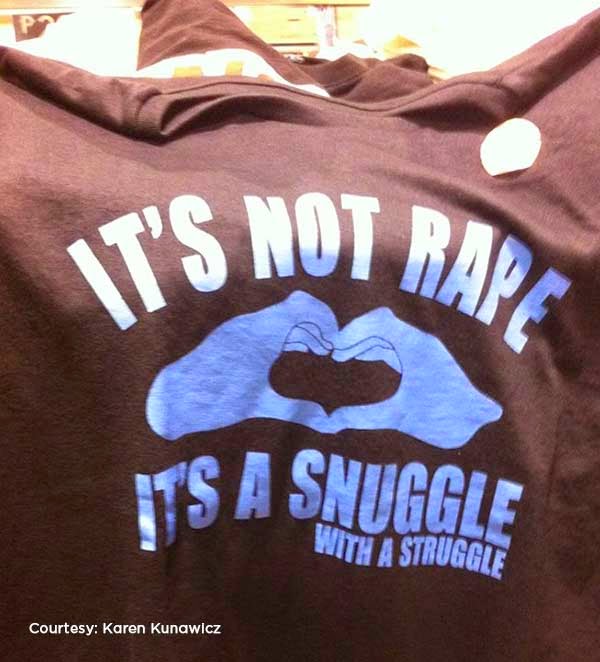 It is similar to this one being sold on the Foul Mouth Shirts website.

Kunawicz said she noticed the shirt being displayed at the boy's section of SM Department Store. Her post garnered over 3,400 shares as of this posting.

Director Robbie Dinglasan commented on said post and alleged that the shirt was part of the collection of Boys' Night Out, an evening radio talk show of Magic 89.9 FM station.

However, BNO host Sam Gogna, more popular known as Sam YG, denied that the shirt is part of their collection.

"The shirt that was posted on Facebook is NOT part of the BNO Tees collection. Rape is a very serious matter. We are against it. No means no," he posted on Instagram.

"We've been informed via social media that we might be stocking a t-shirt with a message that we too find unacceptable. We are investigating on how it was even displayed and will be pulled out immediately," the statement read.

"We do not tolerate such action. SM does not support such irresponsible and malicious acts that mock important and sensitive social issues. We have immediately pulled out all the t-shirts of the consignor that distributes them, and we are investigating why it was included in our delivery of assorted t-shirts."

SM Supermalls vowed that "appropriate action will be taken to ensure that this does not happen again."