The subject of the September 3 article is the warning issued by the Philippine Institute of Volcanology and Seismology (Phivolcs) for people in the Zamboanga peninsula in western Mindanao, saying that the area is "at risk of being hit by a powerful earthquake and tsunami of 10-meter high waves."

The report cited Phivolcs Director Renato Solidum, who said that "it was not possible to predict when and where the earthquake will occur but the area was near the Sulu trench that can cause intensity 8 earthquake if it moved."

"The Sulu trench moved in 1967 and caused an intensity six earthquake that ripped through Pagadian City and several towns in Zamboanga del Sur. It was followed by a tidal wave that swamped coastal barangays and killed more than 1,000 people," says the report written by A. Perez Rimando.

Readers immediately posted their reactions on the year given.

A commenter with the nickname "roel" said: "Philvocs regional director needs more research on this, why? 1.that was August 17 1976 to be exact not 1967 when tsunami hits zamboanga del sur and pagadian city that killed more than 4,000 people."

Netizen John Shinn III added: "very irresponsible reporting on the part of Manila Standard Trash newspaper.....Renato Solidum should be shot on sight for not having his facts right....it was in 1976---not 1967, stupid!"

A quick Google search gave us a downloadable PDF copy of a DOST-PHIVOLCS report titled "PHILIPPINE TSUNAMIS AND SEICHES (1589 to 2012)."

It says "the ferocity of the tsunami that struck the coastal towns of Moro Gulf in the midnight of August 17, 1976 may now be hardly remembered by children who were born after 1976. Deaths attributed to this tsunami varied from 3,000 to 8,000 people."

It also states: "This earthquake occurred almost past midnight of August 17, 1976 at 12:11 AM. People were mostly asleep and were only awakened by the shaking. Some were not able to escape the large tsunami which ensued after a few minutes and that killed more than 3000 inhabitants. 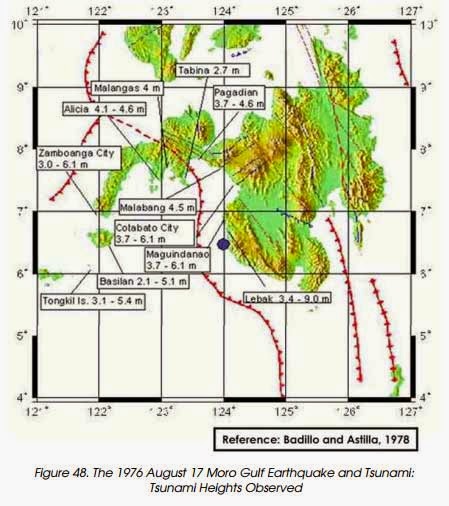 Whether or not the year on the MST article was a typographical error is yet to be known, but the website has not made any correction to date.

A basher called that portion of the report "false information."