By Coolbuster
September 08, 2014newsphotoviral
The EDSA gun toting, which was captured in a photo that went viral on social media, was an incident of kidnapping, authorities have confirmed Monday. 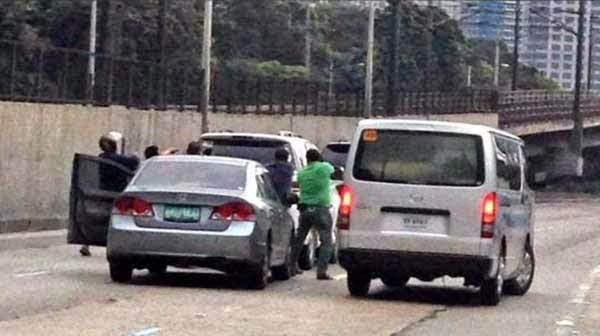 According to an ANC report via Yahoo! News Philippines, secretary Mar Roxas of the Department of the Interior and Local Government (DILG) says the victim was a businessman from Davao City.

The unnamed kidnap victim had money with him during the abduction that happened near a Shell gasoline station, the report stated.

One of the suspects, a policeman, was arrested in Manila over the weekend, while a manhunt for the remaining kidnappers is underway, Roxas adds.

Authorities believe that the rest of the EDSA gun toting men are also members of the PNP.

Recent reports say at least nine police officers from the investigation division of the La Loma Police Station in Quezon City have been identified as the suspected abductors.

The getaway vehicle of the suspects, a Toyota Hi-Ace van, was recovered on Monday and was reportedly placed under the custody of the Mandaluyong City Police.

The anonymous person who took and uploaded the controversial picture had deactivated their Twitter account after it went viral.

If not for the vigilant netizen, the EDSA gun toting incident would have remained unexposed.