By Coolbuster
August 09, 2014newsvideoviral
Several students of a rural high school in Lanao Del Norte were allegedly possessed by spirits after a decades old Acacia tree was cut. 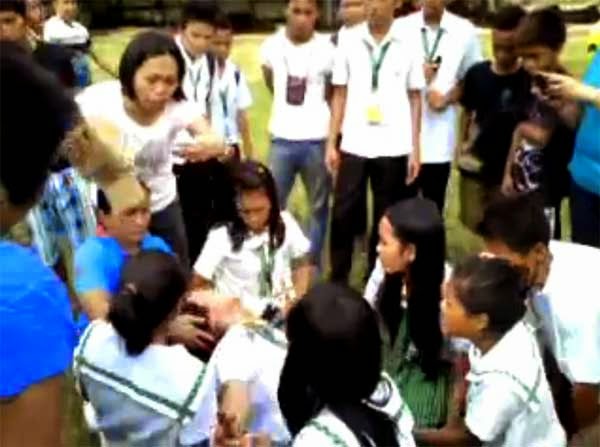 A tipster told Coolbuster.net that the incident took place at Our Lady Of Perpetual Help Academy (OLPHA) in Linamon town, which is about 21 minutes away from Iligan City, around 2:00 p.m. on Friday, August 8, 2014.

According to our source who requested anonimity, more than 20 students from various sections in the third and fourth year levels screamed and spoke with a different voice and language. They also apparently demonstrated superhuman strength as if something evil was controlling them.

The "possession" occured after the cutting of the oldest Acacia tree in the campus, which was reportedly ordered by the school principal.

The details provided by our source have not been independently verified, but there are viral videos on Facebook that support the information.

Post by Gee-Anne Keirstee Delvo-Sanguila.
A quick Google search on this phenomenon directed us to a Wikipedia entry about mass hysteria, which "occurs when a group of people believe they are suffering from a similar ailment."

So what caused the seemingly collective hysteria? The answer can be found on the old Acacia tree itself.

Interferencetheory.com posted: "It is important to note that all species of acacia are known to be hallucinogenic, either in their bark, roots, leaves or fruit, due to the natural production of DiMethylTryptamine or DMT."

A separate Wikipedia entry best explains what this hallucinogenic chemical, which was believed to have spread through the air, can do.

DMT "resembles the basic structure of neurotransmitters" and when ingested, it is "able to cross the human blood-brain-barrier, allowing it to act as a powerful hallucinogenic drug that dramatically affects human consciousness. Depending on the dose and method of administration, its subjective effects can range from short-lived, milder psychedelic states to powerful immersive experiences; these are often described as a total loss of connection to external reality and an experience of encountering indescribable spiritual/alien beings and realms."

According to our source, the affected OLPHA students were brought to a church. There are no reports as to the current condition of the "possessed".