By Admin
August 25, 2014Entertainmentnewstrending topic
The hashtag #BOYPAKYU became a trending topic on Twitter after a Daniel Matsunaga supporter flashed a dirty finger on PBB All In Big Night.

Fans of the Big Four—Daniel Matsunaga, Maris Racal, Jane Oineza, and Vickie Rushton—were given a chance to cheer for their favorite housemate during the reality show's grand finale held Sunday night at Resorts World Manila.

When the camera panned to a group supporting Matsunaga, one fan suddenly flashed a middle finger on screen to everyone's surprise. 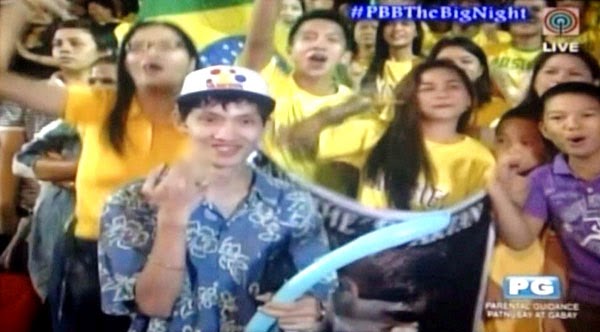 TV viewers quickly turned to social media to post their reactions. Some poked fun on the fan while others criticised him.

Several Twitter users said he "stole the spotlight" from Matsunaga, who was declared Big Winner that evening.

Netizens called him "Boy Pakyu" since. A Facebook page was created after the incident, which started posting funny comments and memes that actually make no sense.

#BOYPAKYU's dirty finger flashing was beyond the network's control. Although rarely, unpredictable circumstances like that do happen in live shows.