Photo: Malaysia Airlines Flight MH17 moments before it was 'shot down' in Ukraine
🔍

Home / news / photo / Photo: Malaysia Airlines Flight MH17 moments before it was 'shot down' in Ukraine

Photo: Malaysia Airlines Flight MH17 moments before it was 'shot down' in Ukraine

By Coolbuster
July 18, 2014newsphoto
Here's a photo of Malaysia Airlines Flight MH17 moments after it took off Amsterdam and before it was allegedly "shot down" over Ukraine.

Marc Eham, a plane spotter in The Netherlands, says: "Malaysia MH17 Boeing 777-200 M9-MRD after take-off moments before shut down above Ukrain."

In a press statement released 12:30 a.m. on Friday, July 18, Malaysia Airlines confirmed it "received notification from Ukrainian ATC [Air Traffic Control] that it had lost contact with flight MH17 at 1415 (GMT) at 30km from Tamak waypoint, approximately 50km from the Russia-Ukraine border."

Flight MH17, the airline company said, "operated on a Boeing 777 departed Amsterdam at 12.15pm (Amsterdam local time) and was estimated to arrive at Kuala Lumpur International Airport at 6.10 am (Malaysia local time) the next day."

It is believed that all 283 passengers and 15 crew onboard died. 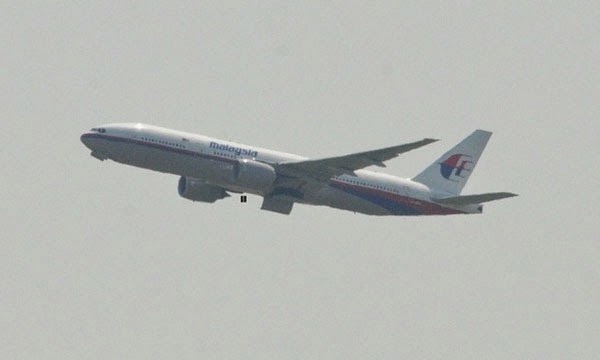 Reports said the Boeing 777 plane was flying enroute to Kuala Lumpur from Amsterdam at an altitude of 33,000 feet when the incident happened.

During a press conference past 1:00 a.m. Friday, Ukranian President Petro Poroshenko described the plane crash as a "terrorist action". Ukranian military believes the jet was shot down by separatists using the Russian-built "Buk" anti-aircraft missile system.

However, Ukrainian separatists told media they do not have weapons to hit a plane at that altitude.