By Admin
July 03, 2014newspolitics
Miriam Defensor Santiago on Wednesday said budget secretary Butch Abad should resign to save the face of the president over the DAP. 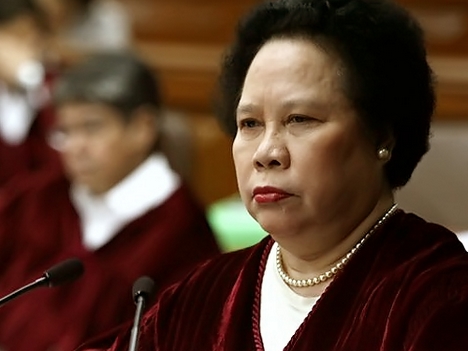 The 69-year-old lawmaker offered her unsolicited advise during a press conference held July 2 at the Senate building where she announced that she was diagnosed with stage four lung cancer and tackled the controversial Disbursement Acceleration Program.

In her presscon, Miriam said "DAP money is stolen money" and "those who used DAP should return the money to the Filipino people."

The feisty senator said someone has to be made responsible for the mess, adding that Abad, secretary of the Department of Budget and Management (DBM), can be held criminally and administratively liable.

Tagged by critics as the brains behind the multi-billion peso program, Abad has kept his silence since the court decision was made public.

In October last year, the cabinet member defended the DAP against allegations that it was utilized to bribe senators who favored the ouster of Chief Justice Renato Corona through the 2012 impeachment trial, saying DAP funds were "used to buoy spending, not to buy votes."

He clarified that the Aquino administration "does not and will not use public funds entrusted to us by the Filipino people to bribe or coerce any individual or group for any given purpose."

Calls for Abad's resignation were loud at the height of the controversy. It became louder after Miriam Defensor Santiago advised him to step down from his post to save the president from further embarrassment.