By Admin
July 07, 2014businessfoodnewssocial mediaviral
An open letter to Gardenia Philippines, written by a consumer who found an insect in its loaf bread product, has gone viral online. 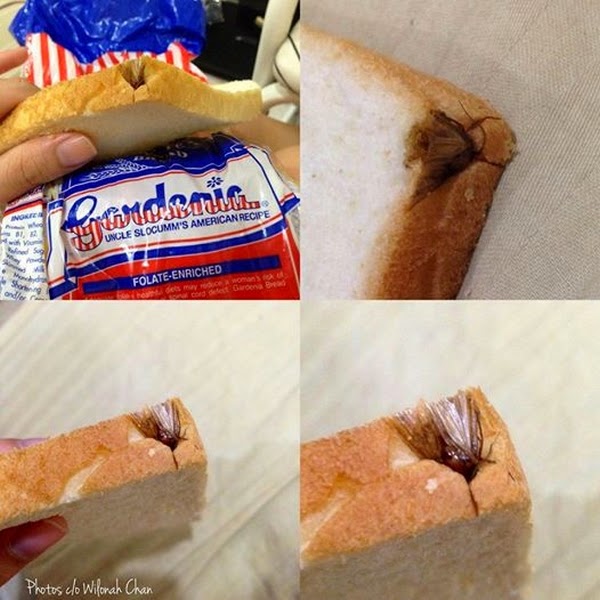 Businesswoman Wilonah Chan was shocked to discover a dead beetle-like bug in a slice of folate-enriched white bread that she was about to eat for breakfast over the weekend.

Chan decided to express her disappointment in writing. However, due to lack of means to provide the company photos as proof, she turned to Facebook and posted her letter with a collage of images showing the disgusting add-on.

I'm a loyal consumer of your product for so many years already and I love your loaf bread, really. However, I would like to express my DISGUST when I saw this unknown insect embedded in one of the slices. I am providing photos as proof that this have happened inside your factory, there is no way that I planted this and I have no reason to do that. All I want is to enjoy my breakfast. Honestly, I'm devastated that I might have eaten the other half of the insect's wings because it's obviously cut by the machine together with the bread.

Back in college, we went to your production plant as part of our field trip. I was amazed knowing that you are ISO certified as well. I can't believe that your QA overlooked this. I've been trying to call your hotline but maybe you relied on your operator system too much or probably because it's a Sunday and no one's in the office today.

I am more than willing to send you this particular slice of bread so you could see for yourself. I cannot find any email address to send you photos in better quality than this photo collage. I just used iPhone BTW, but I did my best to take clear shots.

I am writing this to also share awareness to other consumers that by any chance they experience the same incident, they might want to speak up as well. I know this might cause a bad publicity to your brand but such customer complaint will surely improve the business itself.

And to everyone who's reading this right now, some of you will surely bash me for this but it really won't help. It was NOT YOU who ALMOST ate an insect for breakfast. I'm just disappointed, thank you for your utmost understanding.

The letter immediately garnered thousands of likes, shares, and comments. And just as quick as the post had gone trending, Chan was able to get a response from Gardenia.

The company's social media team asked for her number and offered assistance.

Post by Wilonah Chan.
Many praised Chan for bringing her discovery to public attention, but there were some who criticized and even accused her of circulating a black propaganda that allegedly favored a competing product.

Chan defended herself and made her purpose clear. She said in a response to bashers:

For the record, once and for all, I did not post that open letter for FAME. That's for consumer awareness at dahil din dyan kaya ako na-contact ng Gardenia because I tried to call them before posting it but no luck.

At around midnight on Sunday, Chan posted a photo showing a bowl of noodles paired with, guess what, Gardenia bread.