By Admin
July 03, 2014news
Suspects in the fatal hazing that led to the death of Guillo Servando have spoken of surrender feelers to the NBI, latest news said. 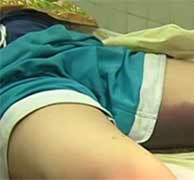 GMA News reports that Atty. Joel Tovera, chief of the Death Investigation Unit, said Thursday that the National Bureau of Investigation received an anonymous call regarding the suspects' plan to voluntarily turn themselves in.

The NBI official noted that they have yet to receive word from the caller again.

At least eleven members of the Tau Gamma Phi fraternity are believed to be involved in the deadly initiation rites that allegedly took place at a compound in Barangay Palanan, Makati City last Saturday, June 28.

Cops were able to locate the suspected hazing venue following the surrender of alleged frat member Jomar Pajarito, who claims he is only a caretaker of the house.

Makati Police chief Senior Supt. Manuel Lukban reportedly said Pajarito is not yet considered a suspect pending validation of his claim that he did not participate in the initiation rites because he left the house upon the arrival of the Triskelions.

According to Lukban, the informant had let the group enter the compound and allowed them to hold a meeting, which turned out to be an initiation, in a vacant lot at the back of the house.

Pajarito, he added, will still be held liable under the Anti-Hazing Law.

In an interview aired on primetime news program TV Patrol, a teary-eyed Pajarito said he submitted himself to investigation because he had pity on the victim. He said Guillo Servando, who appeared weak, asked for a glass of water from him.