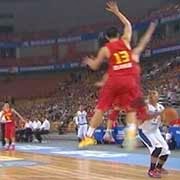 Rain or Shine star Paul Lee was instrumental in the 80-79 victory for the Philippines in its fight for third place against a taller Chinese team. He made all three free throws after the referee decided to call a foul during the final play beyond the three-point line.

It was the best finish made by the Filipino squad in the tournament since 2010.

Joining the tournament was part of Gilas Pilipinas' preparations for the upcoming 2014 FIBA Basketball World Cup that will take place in Spain from August 30 to September 14.

For basketball fans who were not able to watch the game live, here's a four part video replay of Gilas Pilipinas vs China battle for bronze.