By Coolbuster
July 10, 2014newsphotoshowbizviral
For the first time in over two years, Erich Gonzales has revealed her anonymous boyfriend's face in a photo she posted on Instagram. 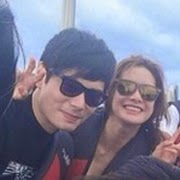 Although the 23-year-old actress admitted in 2012 that she was dating a non-showbiz guy, she kept his identity private. Recently, however, Erich uploaded their picture together, along with her siblings and their pals.

It was sort of putting an end to the mystery. But in an interview, the Kapamilya star proudly said she made the revelation because she wasn't able to contain her happiness at that time.

Most of Erich's fans said her beau looks a lot like Korean star Lee Min Ho. After she had let him read the comments, her boyfriend said the compliments were given so that they will be encouraged to post more photos.

The guy had said the one posted on July 1st should be the last, but the Star Magic talent replied in jest that she'd think about it.

When asked if wedding bells will soon be ringing for the couple, Erich Gonzales said work is her current priority and her boyfriend has been very supportive, incognito.