By Admin
July 13, 2014newsshowbiz
Deniece Cornejo, an accused in the serious illegal detention case filed by Vhong Navarro, has allegedly attempted to commit suicide by slashing her wrist.

Here's the screenshot of the official statement of her legal counsel, Atty. Salvador Panelo, aired on ABS-CBN's showbiz talkshow "The Buzz" on Sunday, July 13. 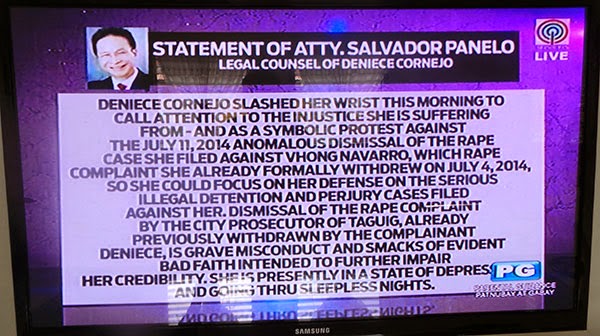 Deniece Cornejo slashed her wrist this morning to call attention to the injustice she is suffering from - and as a symbolic protest against the July 11, 2014 anomalous dismissal of the rape case she filed against Vhong Navarro, which rape complaint she already formally withdrew on July 4, 2014, so she could focus on her defense on the serious illegal detention and perjury cases filed against her.

Dismissal of the rape complaint by the City Prosecutor of Taguig, already previously withdrawn by the complainant Deniece, is grave misconduct and smacks of evident bad faith intended to further impair her credibility.

She is presently in a state of depression and going thru sleepless nights. She is still in shock why she, who is a victim of sexual abuse, is languishing in jail.

She decries the fact that powerful personalities in the movie industry have used their influence on the powers-that-be and the media to cast her as the heel instead of being the wronged victim.

The tragic saga of Deniece Cornejo continues even as the purveyors of injustice remain hostage to ignorance and progressive putrefaction."

Deniece Cornejo is facing charges in connection with the January 22 mauling of Navarro. She is currently detained at the Philippine National Police headquarters in Quezon City.