By Admin
July 06, 2014newsshowbiz
A photo showing the Teen King Daniel Padilla holding a bottle of beer and cigarette was published online and has gone viral recently.

The controversial picture was first posted on the gossip blog site FashionPULIS.com.

In the photo, an apparently younger Daniel is wearing an orange Adidas t-shirt and checkered shorts, standing still while holding a bottle of beer, which appears empty, and a cigarette stick. 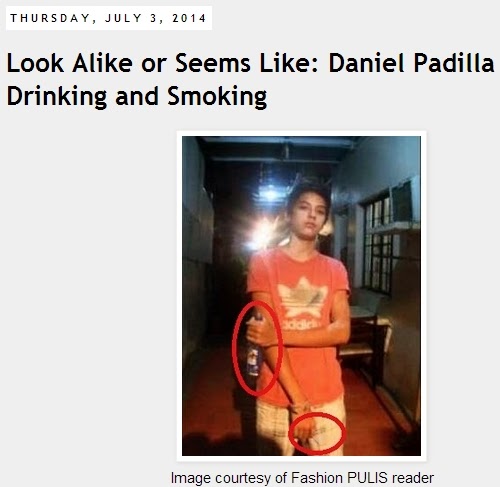 In June last year, the Kapamilya star became an obvious subject of a blind item about “the hottest young actor performer today” who allegedly performed drunk infront of 20,000 people in a private event. Daniel refuted the speculations.

In an interview aired on ABS-CBN's showbiz-oriented talk show "The Buzz" on Sunday, July 6, the "She's Dating The Gangster" actor denied he's the guy in the picture and urged everyone to just ignore the issue.

But how can DJ explain the following "blast from the past" photo which was, coincidentally, posted by the same site last May?

Is the young guy wearing the same t-shirt and shorts just a look-alike? Daniel Padilla is already 19 years old and it isn't unusual that there are men at that age who drink and smoke. Let's say it's part of growing up.

What separates the young actor from other teens is that he is an influential celebrity. He's supposed to be a role model for his generation.