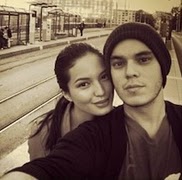 It can be recalled that the Swiss-Filipino actress left the country in early 2013. Back then, she had a legal battle against GMA Network when she flew to Switzerland, with schooling as the reason for leaving.

Amid reports about her pregnancy, she used Instagram to share a picture of her playing a piano. The photo, which quickly went viral, sparked an online debate on whether or not she was concealing a baby bump with a loose dress.

Sarah was elusive to media at that time.

During interviews, Richard kept on refuting speculations that his girlfriend was pregnant. He said rumors about “a baby bump and others” were “baseless” and “best ignored.”

It turned out that all of it were true. The truth finally came out after over a year of hiding it to the public...and the timing was just perfect.

Sarah and Richard revealed their son during the pilot episode of It Takes Gutz to Be a Gutierrez, a new reality show on E! channel starring the Gutierrez family, last Sunday, June 1.

The actress turned to Instagram to share a photo of her hand with a baby's hand resting on it. She captioned the picture:

Extremely proud to announce the new member of our family, baby Zion.

Richard's sister Ruffa also posted on IG that she is happy for her brother and the girlfriend.

"The cat is out of the bag," she said, adding "Oh my Goddddddd!!!! And I'm crying now. Grand revelation on the premiere episode of #ittakesgutztobeagutierrez .@richardgutz publicly announcing he is a proud father. So proud of you and @sarahlahbati."

Sarah Lahbati and Richard Gutierrez' baby has yet to appear on the reality show.