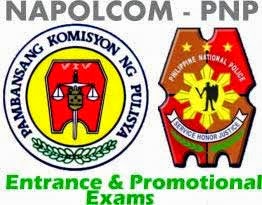 The list of passers and topnotchers is expected to be made available within this month as the agency's official website has already prepared the source page.

Over 35,000 individuals flocked to designated venues across the country last April 27 to take the tests. A total of 14,256 took the entrance exam while 21,101 were distributed to various categories of the promotional exam.

A total of 2,070 or 16.39% out of the 12,631 examinees passed the Philippine National Police (PNP) Entrance Exam conducted by the National Police Commission (NAPOLCOM) on April 27, 2014 in designated schools in Metro Manila and other testing centers nationwide.

This was announced by NAPOLCOM Vice-Chairman and Executive Officer Eduardo U. Escueta as the Commission released the partial list of successful examinees in the PNP Entrance and Promotional Examinations [Police Officer (PO) and Senior Police Officer (SPO) categories only].

“The immediate release of the results of police exams is in consonance with the Commission’s commitment with the PNP and the Department of Budget and Management (DBM) to make the examination results in synch with the police recruitment process,” Escueta said.

Takers and everyone awaiting availability of the April 2014 Napolcom PNP entrance exam results as well as the topnotchers and promotional exam passers list are encouraged to bookmark and visit this site regularly, like our Facebook page, follow us on Twitter, add us on Google+, and/or subscribe to our daily feed for news and relevant updates.