By Coolbuster
June 10, 2014newsvideo scandal
Was Cedric Lee, along with his group, involved in the uploading of the scandalous video of former lovers Hayden Kho and Katrina Halili? 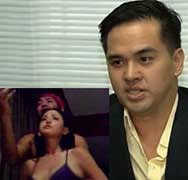 According to a report by hard-hitting broadcast journalist Anthony Taberna, Halili's lawyer requested the Department of Justice to investigate claims that Lee had a hand in the circulation of Kho's intimate videos, which went viral in 2009 and eventually became a subject of a senate inquiry.

Atty. Raymund Palad, who wrote to Justice Secretary Leila de Lima regarding the matter, reportedly said it was Kho who first exposed Lee's extortion try. Lee is one of the personalities arrested and charged with serious illegal detention in connection with the January 22 mauling of actor and TV host Vhong Navarro.

The businessman's group mauled Navarro inside a condominium unit of 22-year-old model Deniece Cornejo after the comedian allegedly tried to rape her. Navarro claimed that the group demanded P2 million, otherwise they will upload a video of his private parts.

Palad reportedly said there's a pattern of extortion based on the two incidents.

Five years ago, Kho reportedly admitted making the videos but said someone else posted the materials in the internet. At the height of the controversy, his mother Irene executed an affidavit after Halili charged both of them with libel. Mrs. Kho included an audio recording of a meeting between her, her son, and a group supposedly affiliated with Lee. The group allegedly tried to extort P4 million from Hayden or else the videos would come out, the report said.

De Lima has ordered the NBI to probe the possible involvement of Cedric Lee in the Hayden Kho video scandal. Lee's legal counsel, on the other hand, reportedly criticized the DOJ for trying to pin his client in another "unfounded issue".